The COVID-19 pandemic has exacerbated the widespread dangers and injustices that workers face every day. For too long, workers have been forced to work in unsafe conditions, suffered from excessive wage theft, and been subjected to discrimination and harassment. While laws aimed at deterring these workplace abuses already exist, enforcement efforts have been woefully insufficient because the agencies tasked with protecting workers are chronically under-resourced. As Congress and the Biden administration work on budget spending and COVID-19 recovery legislation, there is an urgent opportunity to correct these inadequacies in our labor law system and boost funding for enforcement agencies.

The Department of Labor (DOL) and the National Labor Relations Board (NLRB) enforce major worker protection laws, including the Fair Labor Standards Act, the Occupational Safety and Health Act, and the National Labor Relations Act. These statutes guarantee U.S. workers a minimum wage, a safe and healthy workplace, and the right to collective bargaining, respectively, but weak enforcement has led to pervasive and repeated violations of these laws. Despite inflation, a growing workforce, and increasingly complex workplaces, funding for agencies like the Wage and Hour Division (WHD), Occupational Safety and Health Administration (OSHA), and the NLRB has largely remained stagnant over the last decade, as shown in Figure A.

In large part, these agencies’ inability to enforce these statutes fully can be linked to insufficient resources, which impedes the hiring of more investigators or inspectors—staff who play critical roles in initiating investigations and ensuring compliance. As shown in Figure B, the number of private-sector workers per WHD investigators and federal OSHA inspectors has largely increased since 1979. This means that each investigator or inspector is “responsible” for far more employees than they were four decades ago. 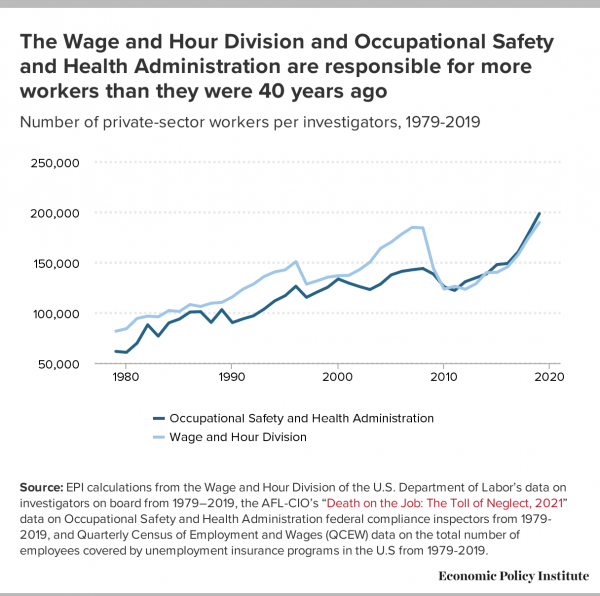 For example, there were 61,642 workers for every federal OSHA inspector in 1979, but this number tripled to 198,532 by 2019. That is 19 times the International Labor Organization’s recommendation of one inspector per 10,000 workers. Even more concerning, OSHA had a record-low number of investigators in 2020 before the onset of the pandemic, which contributed to the sharp decline in agency investigations. OSHA conducted only 21,674 inspections in fiscal year (FY) 2020, compared with 33,393 in FY2019 and 32,023 in FY2018.

This chronic under-resourcing of enforcement agencies has been detrimental to workers’ wellbeing. In 2019, 275 workers died each day from workplace injuries, with Latinx and Black workers—who face more dangerous working conditions—having higher risks of dying on the job. Further, nearly 3.5 million workers suffered workplace injuries or illnesses, as reported by employers. While these statistics are already staggering, they likely underestimate the severity of issues workers face. In fact, the Government Accountability Office (GAO) found that the majority of employers still fail to report workplace injuries due to OSHA’s limited resources and procedures.

Unsurprisingly, the Wage and Hour Division’s enforcement has also suffered from a steady decline in critical staffing. In 1979, there were 81,717 workers for every wage and hour investigator, but that figure more than doubled to 189,878 by 2019. Further, between 2010 to 2019, the number of investigators shrunk by 25{e5fab30bc1af2ab9862fe5c16f5be581fd243b6ad78468b48e940aadfb2b849d} from 1,035 to only 780, and staff interviewed by GAO directly attributed these declines to the agency’s funding levels. Consequently, officials reported taking various steps to stretch its already-thin resources and staffing, including by dropping “low-priority” cases.

Insufficient enforcement also burdens workers with remarkable monetary costs. A 2017 report estimates that in the 10 most populous states in the country, workers lose $8 billion each year to wage theft, averaging $3,300 of lost wages annually per year-round worker. In sharp contrast, DOL and state departments of labor and attorneys general in 2016 recovered just $414 million in back wages on behalf of workers. A recent report from the Peterson Institute for International Economics confirms that the DOL’s weak enforcement system does little to deter wage theft. The paper reports that since many employers are acutely aware of enforcement agencies’ stretched resources, they expect fewer investigations of labor law violations and minimal penalties if caught.

A look at funding and hiring levels at the NLRB, the agency that ensures that workers have the right to form a union, reveals similarly concerning trends: Enforcement continues to take a backseat in agencies’ priorities and has not kept up with the growth in the workforce. As shown in Figure C, despite an increase in the private-sector workforce, the number of full-time employees at the NLRB has dropped by nearly 31{e5fab30bc1af2ab9862fe5c16f5be581fd243b6ad78468b48e940aadfb2b849d} from 1,789 to 1,320 between 2006 and 2019. During the same timeframe, the number of covered workers per NLRB staff increased by 50{e5fab30bc1af2ab9862fe5c16f5be581fd243b6ad78468b48e940aadfb2b849d}, from one full-time employee per 74,809 workers to one full-time employee per 112,201 workers. Further, staffing levels at regional offices, which typically handle the intake of complaints filed by workers, dropped by 33{e5fab30bc1af2ab9862fe5c16f5be581fd243b6ad78468b48e940aadfb2b849d} between 2010 and 2019. Relatedly, a report by the GAO released in March 2021 found a severe decline in morale across the NLRB, with only about one-third of employees agreeing that the agency has sufficient resources, while nearly half admitted to having an unreasonable workload. Unfortunately, the deliberate underfunding of the NLRB is symptomatic of widespread neglect of the importance of enforcement agencies.

Unionization efforts have also faced sustained attacks, as weak enforcement allows illegal conduct to flourish. Our research has shown that employers are charged with violating federal law in 41.5{e5fab30bc1af2ab9862fe5c16f5be581fd243b6ad78468b48e940aadfb2b849d} of all union election campaigns, and one out of five union election campaigns involves a charge that a worker was illegally fired for union activity. Consequently, union elections today are characterized by employer intimidation and in no way reflect the democratic process guaranteed by the National Labor Relations Act. 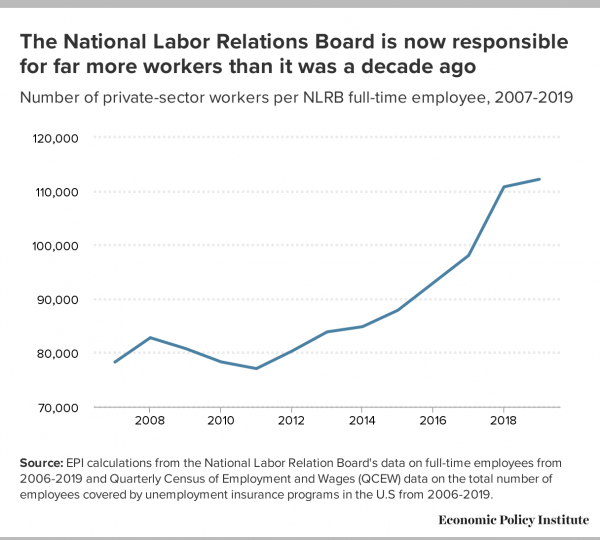 While recent trends in enforcement funding are dismal, there is renewed political will to prioritize the just and timely enforcement of our nation’s labor laws. The Biden administration has signaled its intent to escalate investigations of workplace abuses and has put forth proposals that would significantly boost agencies’ funding. In fact, the Biden proposal sets aside at least $2.1 billion for worker protections, a significant step towards meeting the needs of today’s workforce. As we continue on the road to recovering from the pandemic, stronger enforcement of labor laws should remain central to discussions about reviving the economy and uplifting the working class.