Earlier this year, debate over the inflation spike in 2021 polarized around the question of whether it was “transitory” or “persistent.” But it turns out that this was the wrong distinction. Instead, what should decide if the Federal Reserve is pushed into raising interest rates to cool off growth and tamp down inflation is whether this inflationary shock will be amplified or dampened in the labor market.

If it’s amplified, this means that wage increases will quickly follow price increases, as workers are able to protect their real (inflation-adjusted) wages from higher prices. Higher wage costs will in turn lead to firms raising prices again to protect their profit margins. This tit-for-tat escalation of wages and prices is what led policymakers to intervene decisively to cut short the famous inflation of the 1970s—sparked by a rise in oil prices but then amplified by these types of labor market dynamics.

Exactly these dynamics are on the mind of policymakers. For example, U.S. Treasury Secretary Janet Yellen, when asked about inflation in recent testimony before Congress, responded: “What we don’t want to have develop is a wage-price spiral, in which inflation becomes its own self-reinforcing kind of phenomenon that would become chronic in the U.S. economy—something endemic.”

So far, there is little evidence that the labor market is amplifying inflation. The figure below looks at the recent acceleration in prices and wages across 110 industries. There is very little correlation to be seen. In sectors where inflation is high, like motor vehicle manufacturing, it’s generally not because wage growth is high. And in those sectors where labor scarcity has put upward pressure on wages, like hotels and other accommodations, it has not led to atypically fast price growth. In short, price inflation remains a problem coming from outside the labor market.

We know more precisely just where inflation started—in global supply chain snarls and a huge reallocation of spending away from face-to-face services and towards durable goods. Both of these influences are clearly driven (or at least greatly exacerbated) by the COVID-19 pandemic. Both influences also show real hope of relenting in 2022. Vaccination rates are rising in key global manufacturing and shipping hubs and cargo costs, and other measures of supply chain snarling look to be easing (albeit modestly so far). Most importantly, a durable goods spree in one year will almost certainly not be followed by another (households don’t tend to replace their couch or a car every year).

Wherever it started, the most pressing question remains whether the COVID-19 inflationary shock gets boosted or tamped down by the U.S. labor market. Since the near real-time data above show little sign of the inflationary shock getting boosted by the labor market, it’s worth asking if a longer look back at historical data can tell us anything about this danger. The figures below show the association between upward pressure on prices stemming from non-labor costs (profits and intermediate inputs) and subsequent pressure on prices stemming from labor costs. Essentially, the figures show how much wages were able to rise to protect workers’ inflation-adjusted pay from past inflationary shocks, and how much wage pressure in turn kept inflationary momentum going. 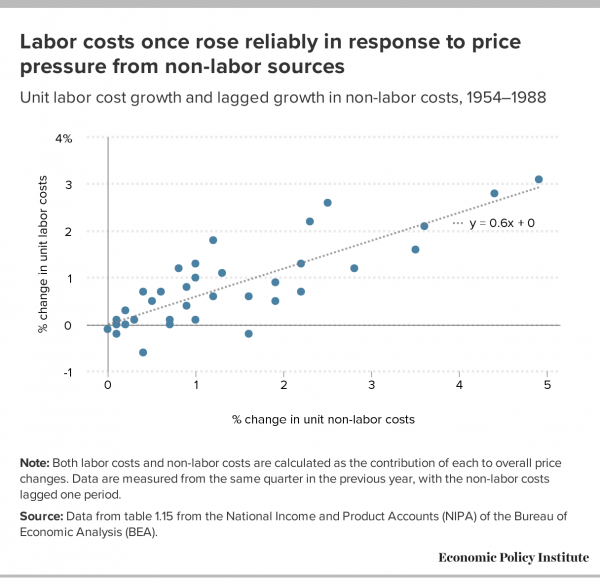 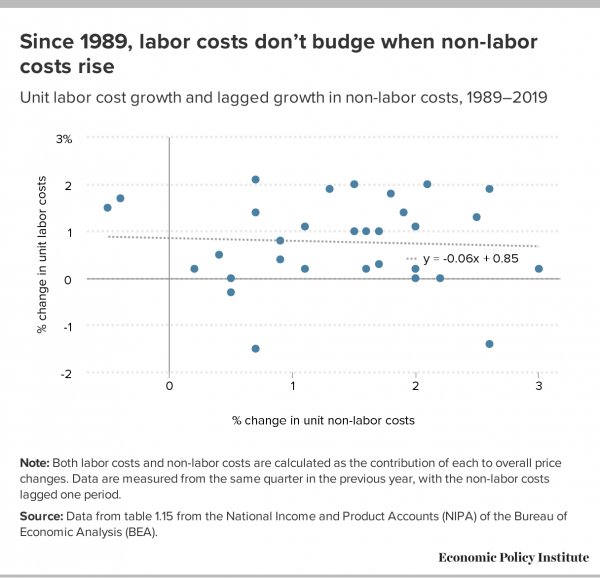 The top panel shows this association between 1954–1988. Each percentage point of inflationary pressure applied by non-labor costs in one year was followed by about half as large an increase in labor costs in the following year—wages were indeed able to respond substantially to a price spike, and this amplified the initial upward move in prices. It was this backdrop that convinced policymakers that it was necessary to raise interest rates sharply to break the 1970s wage-price spiral.

The bottom panel shows this association between 1989–2019. It is essentially zero—workers’ wages did not respond in any systematic way to a price spike coming from non-labor costs. It’s not that workers wouldn’t like to be able to achieve higher wages in response to rising price pressures, but instead a number of developments—most driven by intentional policy decisions—have sapped workers’ bargaining power in the labor market for decades.

Of course, the flipside of disempowered workers unable to shield their wages from a price shock is empowered firms seeing profit margins rise. Higher prices mean somebody is collecting more income. Over the past year, it has been employers in sectors where supply has been impaired—shipping companies, oil producers, and food wholesalers, for example—who are collecting the extra revenue coming in through higher prices.

In a sense, then, it is our disempowered workforce—and their inability to achieve wage gains that hold them harmless in the face of price spikes coming from outside the labor market—that acts as a shock absorber from wage-price spirals forming.

To be clear, a disempowered workforce is not a good thing generally for the U.S. economy. This disempowerment has kept wage growth too slow for too many for decades, it has slowed economic growth generally, and it has been a prime contributor to the decade-long depression of economic activity after the 2008 crisis. It would be better for many reasons if workers had a lot more bargaining power. Of course, if they did have more bargaining power, then policymakers would have to respond more strongly to inflationary shocks, since those shocks could get amplified in the labor market.

But, when the issue at hand is how to make policy decisions today about inflation, we should be clear-eyed about the facts on the ground: worker disempowerment means we can—and should—be far more cautious about raising interest rates to slow inflation even in the face of a large and persistent initial price shock. The shock is far more likely to be smothered by the labor market even before interest rate hikes begin slowing the economy. This means the slower growth due to rate hikes will be overkill, and the overreaction to inflation will be worse than the actual malady.