In previous work, Adam Hersh highlighted how the Infrastructure Investment and Jobs Act (IIJA) and the Build Back Better Act (BBBA) could provide a backstop against the possibility that economic growth slows due to slack in aggregate demand for goods and services in the next couple of years. Over the past few months, a pronounced uptick in inflation convinced far too many that the U.S. economy actually faced the opposite problem of macroeconomic overheating—an excess of aggregate demand.

But late last week, the Bureau of Economic Analysis (BEA) released data making it clear that the U.S. economy is not overheating and that aggregate demand support in 2022 and 2023 could be vital to continued economic growth. Given this, the macroeconomic boost provided by the BBBA in coming years could be valuable indeed.

Below, I expand on each of these points.

The U.S. macroeconomy is not overheating due to “too much” fiscal relief and recovery provided earlier in 2021. The evidence for this can be seen in Figure A below showing actual GDP and potential GDP over the past few years. As of the third quarter of 2021, actual GDP remained below what the Congressional Budget Office (CBO) estimated potential GDP would be in this quarter. In short, given the productive capacity that existed pre-COVID, the U.S. economy should be easily capable of producing as much GDP as was produced in the third quarter of 2021 without causing any inflationary pressures.

The sharp inflationary uptick seen in the spring and summer of 2021 was not driven by a macroeconomic imbalance of aggregate demand and supply. Instead, it was driven by a very sharp reallocation of spending patterns over the COVID-19 economic recovery. Specifically, over the recovery, U.S. households cut back spending on face-to-face services (like restaurants, hotels, gyms) and significantly increased spending on goods (like clothing, furniture, and autos). This pattern was clear in the data by the end of 2020. At that time, while overall GDP was 3% lower than what prevailed in the last quarter of 2019 (immediately pre-COVID), consumer spending on durable goods was already well over 10% higher than it had been before COVID-19.

On the other hand, spending on recreation services was still 32% lower at the end of 2020 than it had been a year before. Surprisingly, while nearly every sector grew between the end of 2020 and the second quarter of 2021 as the recovery from the COVID-19 economic shock proceeded, this extremely skewed allocation of spending persisted. Figure B below shows GDP from a number of sectors from the fourth quarter of 2020 and the second quarter of 2021, both divided by sectoral GDP in the last quarter before COVID hit (the fourth quarter of 2019). It demonstrates that the bias toward goods and away from services that characterized the early part of the COVID-19 economic recovery persisted (and sometimes became even more biased) into 2021. This can be seen in the fact that the height of the blue bars (normalized GDP by sector at the end of 2020) tends to correlate very tightly with the height of the red circles (normalized GDP by sector in the middle of 2021). 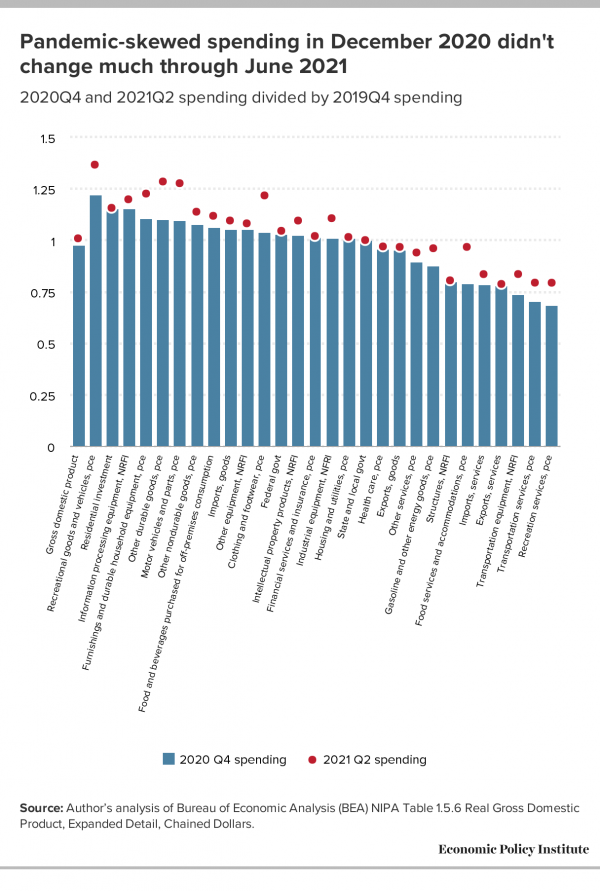 It certainly makes sense that a sharp sectoral reallocation of spending could lead to an uptick in overall inflation. Sectoral inflation is the market’s way of signaling that more productive resources need to flow to a sector to let supply keep up with increased demand. It is potentially surprising, however, that it took as large an inflationary spike as we saw in the spring and summer to accommodate the increased goods production we saw over this time.

Some have argued the simple scale of increased demand for goods is the entire reason for this inflationary spike, with some arguing as a result that this implies that fiscal relief and recovery efforts allowed too-large a surge in goods spending and was the root cause of the spike. This view largely denies any role of unusual supply-chain disruptions or bottlenecks that could have played a part (and which could, if solved quickly, greatly relieve pressure in coming months).

On the first issue, as a share of GDP, goods production in the second quarter of 2021 was 4.5% higher than it had been at the end of 2019. At the macroeconomic level, Phillips curve regressions of inflation rates on estimated output gaps (the gap between potential and actual GDP) would indicate that a 4.5% increase in GDP relative to its normal full employment level would push up inflation rates by about 1.5%. But given that some resources can be shifted into goods production from other sectors (not an option when the entire economy becomes resource-constrained), it seems like the effect on inflation should be more muted than this.

Further, over an 18-month period, normal productivity growth alone should have been sufficient to accommodate almost a third of this rise. Finally, it is far from obvious that goods production in the U.S. economy at the end of 2019 was at its maximum non-inflationary potential. In short, the simple scale of the increase in demand for goods we saw is not completely responsible for the inflationary uptick.

On the second issue—supply chain rigidities—the evidence is also highly suggestive. In smoothly functioning markets, a wave of increased demand for goods should send employers skittering to get more hours of work from employees (both current and prospective) to produce more goods. They would put more effort into hiring and would extend hours for the incumbent workforce. In 2021, they haven’t done much of either in many of the most inflation-heavy sectors. Figure C below shows growth in average hourly earnings and average weekly hours for a number of large sectors. The leisure and hospitality sector saw large increases both in hourly earnings and weekly hours, indicating employers trying hard to match growing demand with more workers. Any such employer effort in goods production or distribution is far less visible—neither wages (to attract new workers) nor hours (to get more labor input out of their existing workforce) grew in any significant way over the past year. This seems like a clear failure to force supply to respond to the wave of demand. 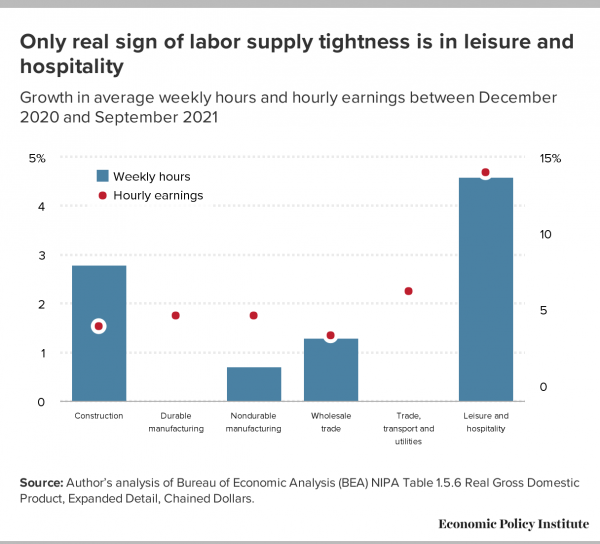 Figure D shows another aspect of supply chain rigidity. Between the end of 2020 and the middle of 2021, consumer spending on new and used cars rose by a whopping 16%. Yet over this same period, domestic production of automobiles declined by nearly 4%. In fact, by the second quarter of 2021, domestic production of automobiles was 2.5% lower than it was at the end of 2019, even as spending on new and used cars was 27% higher. Given this extraordinary rise in consumer demand for autos, what besides supply-side dysfunction could explain falling domestic production? The automobile sector was clearly the epicenter of inflationary pressures that were seen in mid-2021. 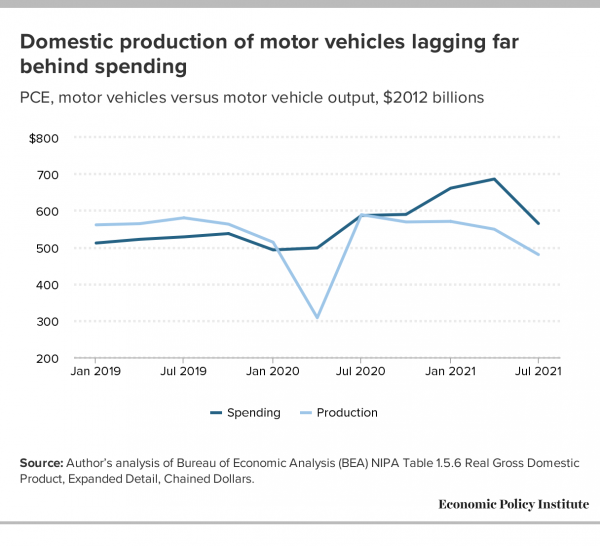 Critics of the scale of the fiscal relief and recovery measures in the American Rescue Plan (ARP) passed in March 2021 have claimed some vindication from the mid-year inflationary spike. But U.S. households would not be better off today had policymakers passed less fiscal relief.

The real-time criticisms of the ARP did not center on the allocation of spending or on extraordinary rigidity and dysfunction on the supply side of goods production. Instead, they focused on aggregate output gaps, but these gaps (as we showed previously in Figure A) have not even yet been closed, let alone been pushed into inflationary territory. Occasionally, the ARP critics also focused on the perceived excess generosity of unemployment insurance (UI) benefits as potentially driving inflation from the labor market by providing too-much bargaining clout to workers. While the labor market is currently hot in many pockets, it is not sectors with fast wage growth that are driving the inflation in prices.

Even without correcting for “base effects” that exaggerate the acceleration of inflation since the COVID-19 economic shock in 2020, year-over-year core price (excluding food and energy) inflation rose from 1.5% to 3.5%. So, households are still far ahead in terms of inflation-adjusted incomes due to the relief and recovery. If this relief and recovery had been withheld, it is far from clear that only spending on goods would have been cut back. To the degree that faster income growth has helped the still-sluggish growth in face-to-face service sectors, it has boosted labor incomes and job opportunities. This all seems supremely well worth it.

Do I wish that U.S. households had spread out their purchase of goods and reoriented spending toward services over the year, generating a more-gentle rise in inflation? All else equal, sure. But the primary driver of continued depressed spending in face-to-face services remains COVID-19—and the emergence of the Delta variant specifically. Do I also wish producers—both domestic and global—had been better able to ramp up their productive capacity in response to a surge in demand for goods? Again, yes, but a primary bottleneck in the production and distribution of goods globally has been COVID-19, specifically its effects in shutting down port facilities around the world. Policymaking in a pandemic has indeed proven to be hard, but making fiscal policy strongly expansionary over the past year has served the economy well. The big inflation drivers—reallocated spending towards goods and supply chain rigidities—are all about the effects of COVID-19. In this case, public health policy really does become anti-inflation policy.

Absent passage of the IIJA and the BBBA, fiscal policy is already set to become quite contractionary in the next two years. Given the lag with which interest rate increases slow aggregate demand, if the Federal Reserve raises rates in the near future, economic growth could be severely curtailed in 2022 and 2023.

Policymakers shouldn’t overreact to the mid-year inflationary surge that is already levelling off. The Fed should keep rates low and Congress should pass the IIJA and the BBBA. The latter two policies would provide a host of benefits besides simple macroeconomic stabilization, boosting long-run growth and economic security through public investment and deeper social insurance. But they also provide a macroeconomic insurance policy against aggregate demand growing too slowly in coming years, and this insurance policy looks more important to secure with each passing day.