The passage of the American Rescue Plan (ARP) is a watershed moment for state and local governments. It is an opportunity to undo much of the damage caused by the COVID-19 pandemic and begin to address some of the long-standing inadequacies and inequities caused by decades of disinvestment in public services. As our colleague Josh Bivens notes, the bill’s $350 billion in aid to state and local governments will critically help many localities fill in for revenue losses, stem budget cuts, and respond—with important flexibility over the next few years—to massively increased fiscal demands caused by the pandemic.

Although revenue losses in some states were not as dire as predicted early in the pandemic, state and local governments across the country have, nevertheless, already made massive cuts to their budgets and staffs. These cuts have serious implications for the health of local economies and the quality of life in those communities. In this piece, we document the losses that have already occurred in state and local government workforces and take a closer look at who these workers are and what they do. We also discuss the opportunity that policymakers now have to truly “build back better” and what that could mean for communities throughout the country that were struggling long before the coronavirus appeared. In particular, we show that:

This is a massive blow to the public sector—nearly three times the job losses that occurred in state and local government employment after the Great Recession. As shown in Figure A, state and local governments initially added jobs at the onset of the Great Recession. However, by 2010 when the recession had official ended, inadequate federal aid forced many cash-strapped states and localities to roll back public services and cut a total of 566,000 jobs between January 2008 and July 2013. This was a costly mistake that delayed the recovery by over four years and stifled private-sector job growth in the states that made cuts.

Now, in the wake of the pandemic, staffing demands will be even greater. Schools will need to make adjustments that allow greater social distancing (e.g., smaller class sizes and reduced bus capacities). Making up for a year of distance or hybrid learning will require more specialized instruction. Many schools may need more counselors and mental health professionals. Public health agencies will need expanded capacity to support vaccine distribution, continued testing and tracing, and expanded access to preventative care. Nursing and long-term care facilities—many of which are funded through Medicare and Medicaid—will need to undo the low pay, inadequate staffing, and high turnover rates that made COVID so deadly in these facilities. Public agencies may need additional capacity to support millions of people and families still without jobs, lacking adequate food, struggling to pay rents and mortgages—as well as businesses figuring out how to access relief programs and reopen safely.

Every state has lost state and local government jobs, with some cutting more than 10% of their public-sector workforce

As shown in Figure B, state and local government employment is still below pre-pandemic levels in every state. While the severity of job loss varies, employment in this sector has declined by more than 5% in a majority of states and by more than 10% in three states: New Hampshire (-13.7%), Nevada (-10.4%), and Maine (-10.4%). 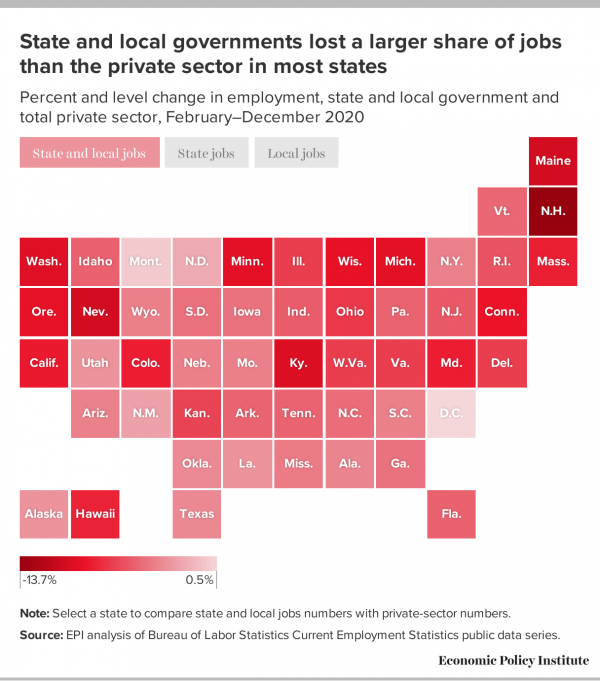 Providing safe, enriching, and accessible schools and other child care centers is critical for working parents, too. Child care and other learning centers account for a little less than 1% of state and local employment, but the importance of this workforce was made abundantly clear in the pandemic. State and local governments need to consider whether past resources provided for early child care education are really meeting the needs of working families in their communities.

The pandemic has also underscored the importance of public health services and caregiving as well as programs that provide community members with economic security. Public hospitals and outpatient centers employ 5.4% of state and 2.2% of local government workers with smaller percentages working in home health care services and nursing and residential care facilities. More than one in 13 state government employees (7.8%) works administering programs that have been a lifeline for so many during the pandemic, including unemployment insurance, Medicare, and Medicaid. A key lesson from the pandemic is that these public services need the resources to be able to respond quickly and effectively to public health crises and periods of economic insecurity.

Many state and local government employees are also quite literally building better communities by improving and maintaining infrastructure, whether it is the roads we drive on, the sewers and waste collection that we take for granted, or the utilities that power our homes. Public transit accounts for 1.0% of state and 1.7% of local government employment, while power, gas, water, waste management, sewage treatment, and other remediation services make up a combined 0.7% of state and 2.97% of local public employment. 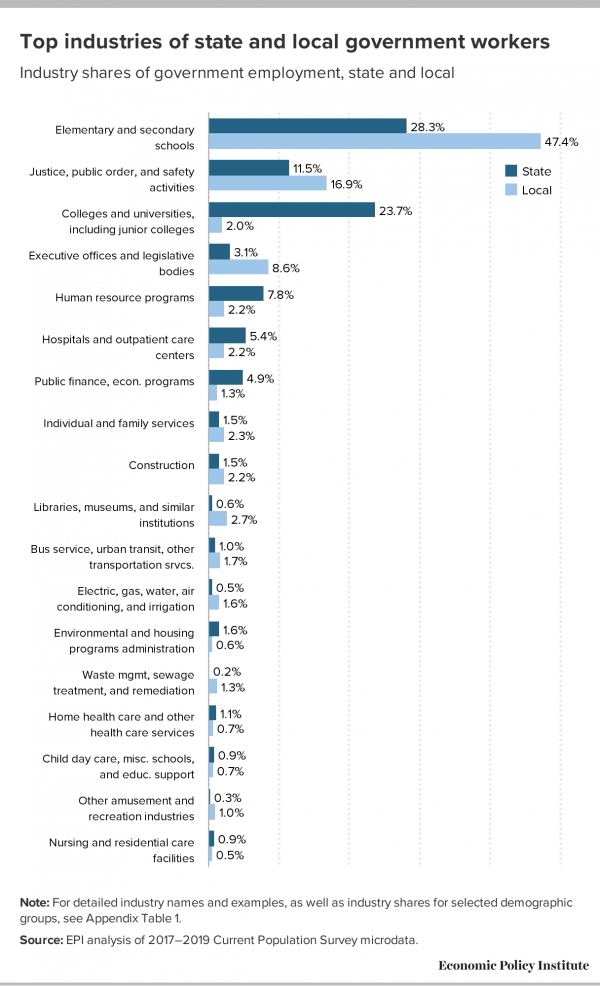 While the top industries give a sense of where state and local government employees work, the top occupations, displayed in Figure D, describe what they do. The public education system obviously has many teachers (26.5% of employment), but there are also a myriad of other employees who keep schools open and flourishing, including teaching assistants (3.8%), counselors (1.8%), administrators (2.5%), and bus drivers (1.6%). In schools and elsewhere, these public-sector workers are also doing the vital work of keeping our communities clean (janitors and building cleaners: 2.5%), healthy (registered nurses and personal and home care aides: 3.1%; social workers and counselors: 3.6%), and safe (firefighters, EMTs, paramedics, and dispatchers: 2.6%). 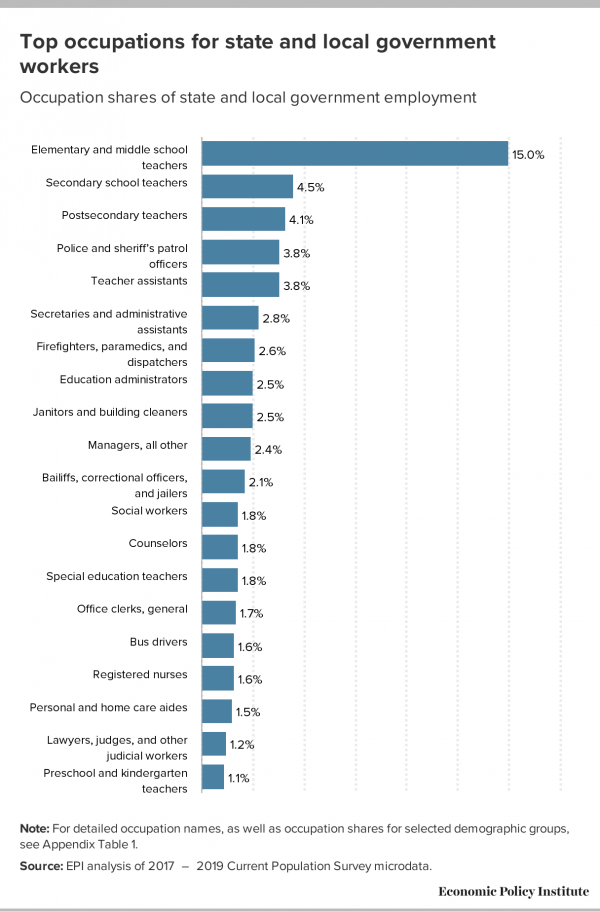 The disproportionate representation of women and Black workers in those jobs means that, all else being equal, they disproportionately feel the pain of any state and local employment and budget cuts. It also means that the funding provided by the ARP is an opportunity to invest in and expand a diverse sector that has historically been a cornerstone of good, middle-class jobs for many communities. 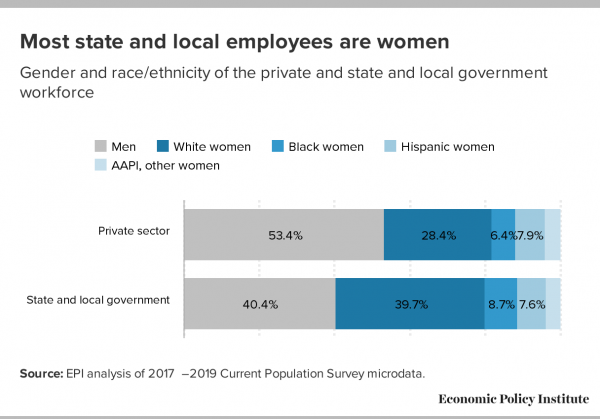 Although Hispanic workers overall are underrepresented in the state and local government jobs sector (12.5%, compared with 18.5%), Hispanic women actually make up similar shares of this workforce and the private sector. We see a similar trend for workers who are Asian American/Pacific Islander (AAPI) or who are in the “other” race/ethnicity category.

The opportunity to truly ‘build back better’

The American Rescue Plan provides billions of dollars for state and local governments to fill in budget holes, restore cuts made because of the recession, and respond to ongoing elevated public needs over the next few years. It also provides funds that will allow governments to fix problems brought to light by the pandemic and make investments in key public infrastructure. There are innumerable areas in which expanded state and local investment are eminently needed—and we raise a handful below. But one of the central lessons of the pandemic has to be that unless policymakers proactively work to undo the United States’ profound racial inequities, people and communities of color will continue to disproportionately suffer in times of crisis—as they have throughout the COVID-19 pandemic. State and local tax policy and public investment decisions can and must be used to build more equitable and anti-racist communities.

Some of the other clear needs exposed by the pandemic include: modernizing unemployment insurance systems; expanding public health services and access to preventative care; ensuring schools and other public buildings in every community have proper ventilation and other critical safety infrastructure; providing educators with the resources they need to ensure all students can succeed even in times of disruption; expanding access to paid leave when workers are ill or caring for a sick family member; ensuring nursing and long-term care facilities have adequate staffing; expanding broadband access to enable remote work; investing in public transit systems to make them safe and accessible to workers whose jobs require them to work in person; and considering climate mitigation measures that will help prevent future crises. The funding from the ARP will not be enough to make permanent changes to all of these things, but it will be enough in many cases to lay the groundwork for new programs and reforms for which lawmakers can subsequently establish dedicated funding.

These are just a handful of the needs that we could identify, but the reality is that no one has a clearer sense of the needs of local communities than the people in those communities and the public servants who work to serve them. Policymakers should talk to the people in the communities that have suffered the most; talk to the workers and families who have struggled to access public supports; talk to the parents who have had to juggle caring for and educating children while trying to work; talk to the educators, support staff, and school administrators who were asked to provide an enriching learning experience in near impossible circumstances. Centering the workers and communities most affected by the pandemic is the surest way to ensure that the country rebuilds from the pandemic stronger than we were before.

Sign up for EPI’s newsletter so you never miss our research and insights on ways to make the economy work better for everyone. 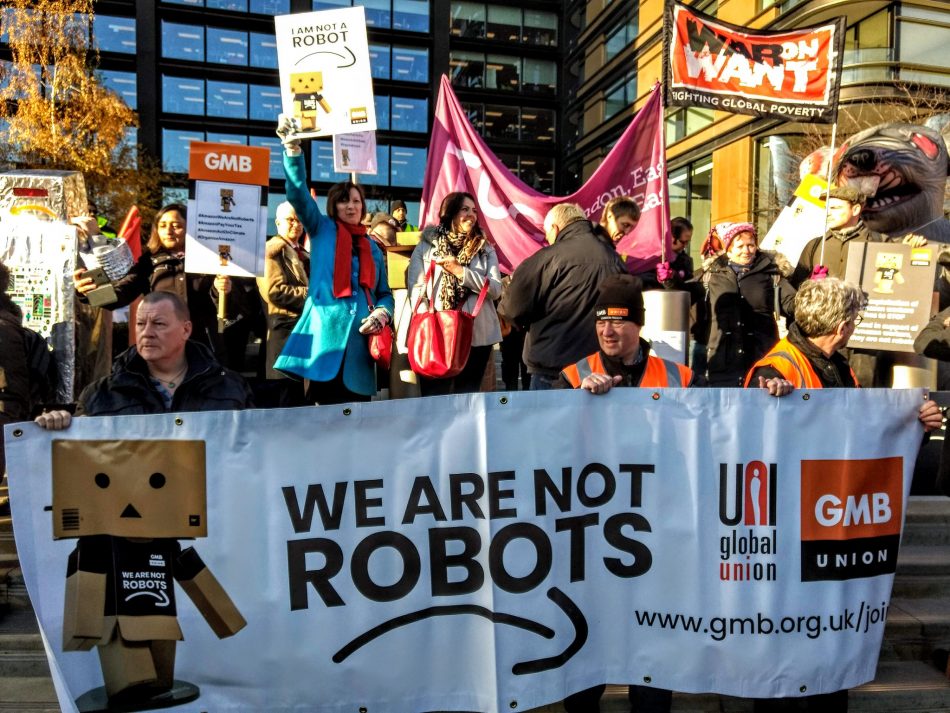