As Congress debates the appropriate amount of investments needed to boost the economic recovery from the COVID-19-induced recession, we can learn a lot by carefully looking at the decisions made in the aftermath of the Great Recession of 2007–2009. One of the clearest lessons of that period is that spending by the federal government largely dictated the amount of economic suffering for those hit the hardest. When that spending falls short of what is needed, some groups never fully recover.

School finance deserves a place in this discussion. Federal support to education plays a critical role in filling recession-induced fiscal gaps that open at the state and local levels, and maintaining education funding during economic downturns contributes to a faster and fuller economic recovery. As we discuss in this post, if federal investments in public education had been larger, sustained as needed, and allocated in a way that channeled further assistance to districts serving larger shares of low-income students, they would have better assisted our students, schools, and communities in the aftermath of the Great Recession.

As shown in Figure A below, federal funding and the additional recovery funds targeted to education through the American Recovery and Reinvestment Act (ARRA) enacted in February 2009 provided an initial and critical counterbalance to the defunding brought about by the recession. Figure A shows national trends in revenue per student, by source (federal, state, and local), from the onset of the Great Recession through 2017–2018.1 Per-student state revenue fell precipitously between 2007–2008 and 2012–2013—by just over $800 at the low point. While property taxes did not decrease, other local revenues fell by $160 by 2010–2011, only recovering to 2007–2008 levels in 2014–2015. At the recession’s peak, districts were receiving slightly over $600 more per student from the federal government than they were before the recession, with total federal funds accounting for 12.7{e5fab30bc1af2ab9862fe5c16f5be581fd243b6ad78468b48e940aadfb2b849d} of total revenue in 2009–2010, compared with just 8.2{e5fab30bc1af2ab9862fe5c16f5be581fd243b6ad78468b48e940aadfb2b849d} in 2007–2008.2 Critically and smartly, the federal investments upheld education funding. Without these funds, the collapse and ramifications would have been much larger.

However, the clawback of federal revenues after 2010–2011, as the broader economic recovery was underway, meant that there was a steep decline in total revenue in tandem with the state revenue trend. The phasing out of ARRA funds, together with continued gaps in state and local revenues, left a total shortfall of nearly $1,000 per student in 2012–2013, a point when the economic recovery was purportedly in full swing.

Nationally, per-student total revenue did not return to pre–Great Recession levels until the 2015–2016 school year.3 In other words, despite the increase in federal resources available to public education in the aftermath of the Great Recession, total real revenue per student nationally lagged behind the pre-recession level, on average, for eight school years after the onset of the economic downturn. These protracted deficits in public school funding triggered a cascade of negative consequences for schools, children, and educators. Notably, the consequences were not experienced uniformly across districts, reflecting trends in unequal levels of funding prior to and in the aftermath of the recession.

Indeed, the national averages mask significant differences across districts by the socioeconomic circumstances of the students they serve. The available public school finance data suggest that high-poverty districts and their students experienced the biggest shortfalls—and a very sluggish recovery. As Figure B illustrates, districts with relatively small shares of poor students (defined here as the districts with poverty rates in the lowest two quartiles of the school-age children’s poverty rate) never saw revenues per student fall below their pre–Great Recession level, adjusted for inflation and state cost of living. By contrast, the one-fourth of districts with the largest share of students from poor families were below their pre-Great Recession level of per-student revenues through the 2015–2016 school year. The two highest-poverty districts did not recover to their own pre-recession per-student revenue levels until 2014–2015 and 2015–2016, respectively. In 2018, a decade after the Great Recession had first hit, they still lagged behind their wealthier counterpart districts in rising back to their own per-student, pre-recession funding levels. 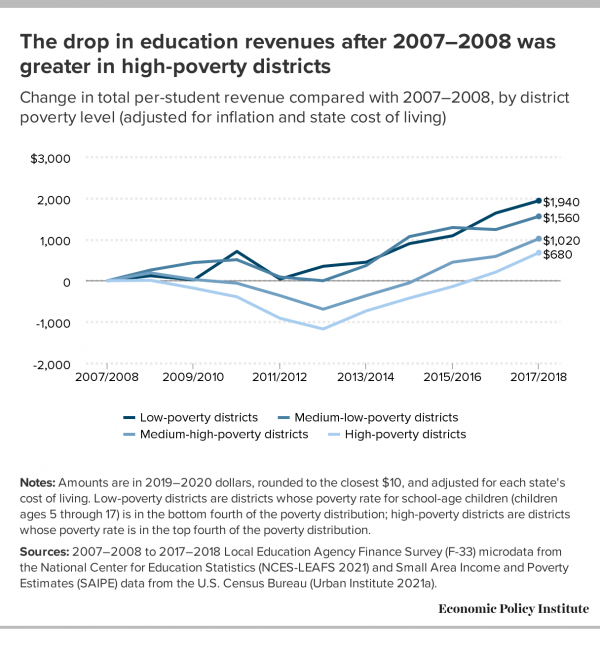 In short, millions of students across the country continued to suffer the aftereffects of the Great Recession for almost a full decade following the onset of the economic downturn. They received less effective instruction and fewer enrichment opportunities than they should have, because policymakers decided that they were not as high a priority as banks or corporations. These students were less likely to graduate than they would have been had policymakers’ priorities been better aligned. As a result, many may not reach their goals for higher education, jobs, and life, or be able to contribute as much to the economy and society going forward.

We cannot afford to make the same mistakes again—to consign yet another generation to substandard K–12 education because of an economic recession. Balancing depleted budgets on the backs of our children, especially those living in high-poverty areas, harms children and is more costly in the long run. Now that Congress is poised to act on the largest infrastructure package in nearly a century—one that is long overdue and desperately needed—policymakers must continue to demand more for our children and their education, and they must not hesitate to also advance the necessary investments for public education.

1. Note that the following discussion and data refer exclusively to school revenues, not expenditures, as that allows us to track the sources of revenue (federal, state, and local). For the purposes of this discussion, however, revenues, expenditures, and funding are treated as synonymous. School year 2017–2018 was the most recent one available at the time of completion of our research. We also note that the Great Recession started as the 2007–2008 school year was underway, so we are using the term pre-recession level flexibly and assuming school budgets do not immediately respond to the economic recession.

3. We acknowledge that only the first half of the school year 2007–2008 was pre-recession. December 2007 was the onset of the Great Recession, and 2008 is the first year of the Great Recession. We make the assumptions that school budgets are mostly preset before the school years and that they adjust less rapidly than other economic variables to the macroeconomic context.