The Occupational Safety and Health Administration (OSHA) has proposed an emergency temporary standard (ETS) for employers to cope with the health dangers posed by COVID-19. The centerpiece of the ETS is a vaccine-or-test mandate for employees working at firms with over 100 employees to be vaccinated against COVID-19. The mandate is good public policy: it will reduce deaths and hospitalizations, and it will also increase economic growth and reduce the main inflationary pressures facing the U.S. economy.

The proposed ETS has spurred a large legal battle and its eventual fate is uncertain, even though exemptions for religious and health reasons are possible, and a version of these standards is already in effect for federal government employees, government contractors, and health care workers. In early November, the U.S. Court of Appeals for the Fifth Circuit stayed the ETS pending judicial review. However, over this past weekend, the stay was removed by the court with current jurisdiction over the case (the U.S. Court of Appeals for the Sixth Circuit).

The lifting of the ETS stay is welcome news. The vaccine-or-test mandate is a key plank in an effective public health response to the continuing havoc wreaked by COVID-19. For example, a recent paper examining the introduction of vaccine mandates at the provincial level in Canada, France, and Germany found “that the announcement of a mandate is associated with a rapid and significant surge in new vaccinations (more than 60% increase in weekly first doses)…” Higher vaccination rates will contribute meaningfully to reducing deaths and hospitalizations from COVID-19.

Despite broad availability, the United States lags far behind dozens of countries in vaccination rates, and a mandate would likely boost the U.S. rate in a significant way. Recent research examining the international experience of vaccine mandates by Karaivanov et al. (2021) finds large increases in vaccination rates (up to 5 percentage points) driven by mandates.

The mandate would have large economic effects as well, even beyond the considerable economic value of deaths and hospitalizations averted. Overall economic growth over the past year has been largely driven by the fall and rise of COVID-19 cases. In the first six months of this year, as case growth fell sharply, gross domestic product (GDP) rose at a 6.5% annualized rate—an extraordinarily fast pace of growth. However, in the third quarter, as the Delta variant surged in the United States in August and September, GDP growth decelerated to just 2.1%.

Further, from February to July—the six months prior to the Delta variant hitting the U.S. economy—job growth averaged 710,000 per month. However, since August and the rise of the Delta variant, job growth has fallen to a monthly average of 405,000—a respectable pace compared with previous recoveries, but a pronounced slowdown.

Looking more granularly at state-level data in the major sector most affected by social distancing requirements—leisure and hospitality—we also see that employment growth in the first 10 months of 2021 was positively correlated with a state’s vaccination progress over that time. Figure A below shows that states with higher total vaccination rates in October 2021 also saw faster leisure and hospitality job growth between January and October. These links between faster economic growth, greater job creation, and virus control are generally well-understood. Less well-known, however, is that the economic effects of COVID-19 are by far the largest drivers of the acceleration in U.S. inflation in 2021. Inflation rates are higher than usual because the pandemic has reallocated consumer spending away from services and towards goods, exacerbating supply chain problems.

As we have noted elsewhere, the inflation acceleration in 2021 is not happening because the U.S. economy’s underlying productive capacity has been overwhelmed by too much spending—whether private or public spending. In fact, measured “output gaps”—the difference between actual GDP and the economy’s underlying productive capacity measured by potential GDP—remain negative, a fact usually associated with mild disinflation. But even as aggregate spending remains below the economy’s underlying capacity, the allocation of this spending has changed radically, shifting away from face-to-face services and towards goods (particularly durable goods). This is clearly an effect of COVID-19; households still feel uncomfortable doing as much face-to-face service consumption as they did before March 2020, yet fiscal relief measures substantially supported incomes (until this fall).

An unanticipatedly large share of this income has been thrown into the goods sector. This, of course, does not simply mean that less aid should’ve been provided overall. In the set of realistic choices facing policymakers in January 2021, providing less aid than was provided by the American Rescue Plan (ARP) would’ve been the wrong choice. Even with the inflation acceleration of 2021, household incomes are higher at the end of the year because of the ARP aid.

Policymakers with perfect foresight about the sui generis problems that would emerge in 2021 with supply chains and the reallocation of household spending following a once-in-a-century pandemic could perhaps have tweaked the pandemic fiscal relief in ways that would’ve led to less-pronounced inflationary pressure. For example, households could have been provided two sets of vouchers instead of cash relief. One of the vouchers could be used immediately, but only to purchases services. The other set of vouchers could be spent on goods, but could only be used slowly over time, starting small and rising in value each month. Of course, just writing out how pandemic aid could have been structured differently to avoid inflationary pressures highlights how politically unrealistic all of this would have been, and how unreasonable it would be now to judge policymakers for not providing it in this way.

On the supply side, goods production is far more affected by global events than services. Globally, the rise of the Delta variant this summer caused rolling shutdowns of ports and transport facilities around the globe, snarling supply chains. This is threatening to repeat itself with the rise of the Omicron variant.

Despite rhetoric in the United States blaming inflation on fiscal relief efforts following COVID-19, the acceleration of core inflation across countries is unrelated to the size of these relief efforts. Outside of clearly global energy markets, core inflation (inflation excluding the volatile prices of energy and food) has accelerated across a range of countries that undertook widely varying levels of COVID-19 fiscal relief. Figure B below shows the relationship between the increased spending or decreased taxes resulting from discretionary fiscal relief aimed at blunting the economic shock of COVID-19 across countries, and the acceleration in core inflation in September 2021 relative to pre-COVID-19 trends. As can be seen, there is no relationship at all. 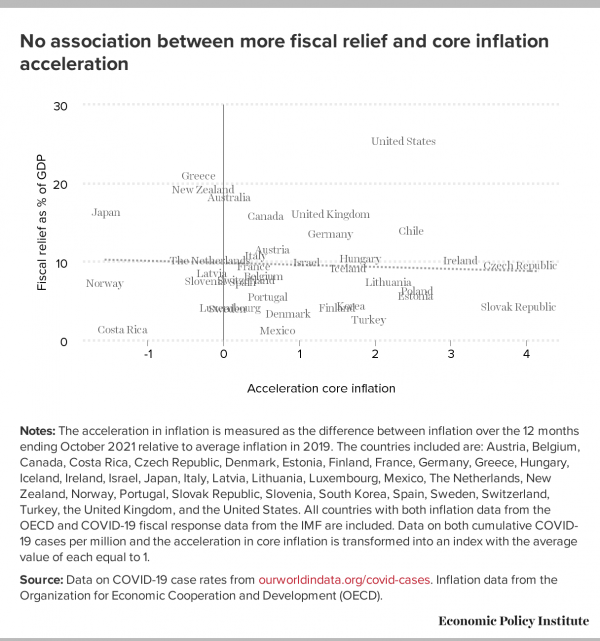 However, there is a slight but significant pattern of core inflation accelerating more in countries with larger COVID-19 shocks, as shown below in Figure C. For the same countries examined in Figure A, there is a positive correlation between cumulative COVID-19 cases and the acceleration in core price inflation. 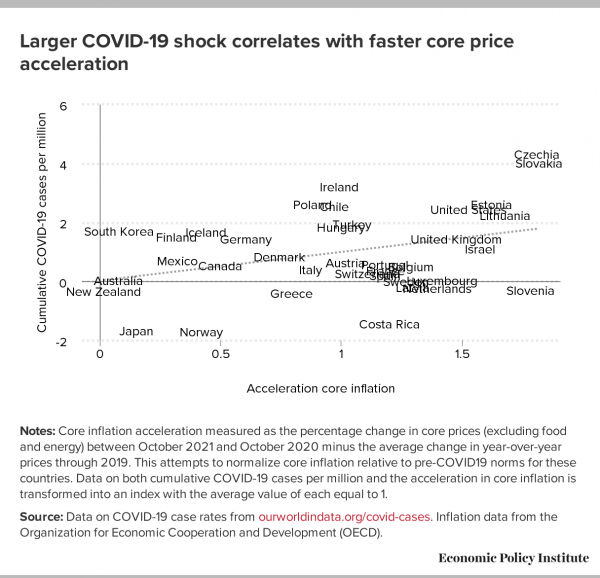 In short, the extreme distortions caused by COVID-19 in the United States—a sharp reallocation of spending away from services towards goods and supply chains bottlenecks—are also associated with inflation in other countries as well. One reason why U.S. inflation has been more pronounced than in other countries is because our COVID-19 case counts have been higher. As a result, public health policy is clearly the most effective economic policy we have to tamp inflation back down. Vaccines, in turn, are by far our most powerful public health measure against COVID-19. Maximizing vaccination rates both domestically and globally hence will pay huge economic returns. Domestically, an employer mandate is an invaluable tool for maximizing vaccination rates. 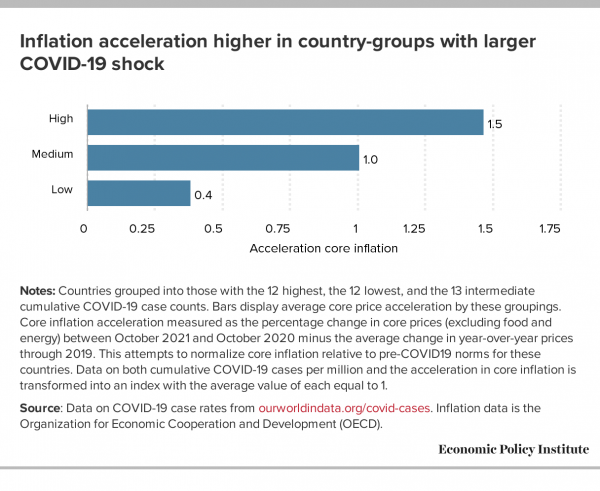