The Biden administration has made large investments in care work—both child care and elder care—key planks in its American Jobs Plan (AJP) and American Families Plan (AFP). These investments would be transformative, and a greater public role in providing this care work can make the U.S. economy fairer and more efficient. The administration has also recognized the need to pay workers in these sectors higher wages—which are sorely needed—but setting a fair wage standard for care workers presents unique challenges.

For a variety of systemic reasons, including racism, misogyny, and xenophobia, there has never been a set of institutions that has managed to carve out decent wages and working conditions in care work. For example, the average hourly wages for home health care and child care workers are $13.81 and $13.51, respectively, which is roughly half the average hourly wage for the workforce as a whole. So, unlike sectors like construction, a “prevailing wage” standard would just cement the industry-wide insufficient wages currently experienced in care work.

But just because it’s challenging doesn’t mean it’s impossible to establish strong wage standards in this sector. All wages in the U.S. economy are politically and socially determined, but given that care work is heavily publicly financed, care wages are especially determined by political decisions (via commission or omission). As a result, there is a strong administrative responsibility and opportunity to set equitable wages in this sector. This research memo outlines a number of ways to improve the wage standard for care workers and is a preview to a forthcoming, more comprehensive research report.

Care work enables people to survive and thrive across generations, and it cannot be accomplished without workers. Yet our value systems and social relations acutely undervalue care work and discredit its importance to our lives. These phenomena are deeply rooted in misogyny, xenophobia, and in the U.S. context, anti-Blackness. We cannot recognize and remedy the precarious and immiserating wages of most care work without acknowledging and rectifying the roles these identities have played in shaping the conditions and workforce of care provision.

Care workers are overwhelmingly women and disproportionately Black, Hispanic, and immigrants, groups which have traditionally faced discrimination in labor markets and in the political process. As shown in Figure A, both the home health care and child care sectors are overwhelmingly women, and Black and Hispanic women are largely overrepresented relative to their share in the overall workforce. In addition to facing racism and sexism in the labor market, care workers—particularly home health care workers—are disproportionately more likely to be foreign born (either naturalized or not), which gives them even less power to negotiate for higher wages or better working conditions. This necessitates a look at not only how we undervalue care itself, but also who care workers are and the historical and social discriminations they have faced and still face today.

Care work being predominantly borne by women of color, and specifically Black women, dates back to slavery. The racial and gender-motivated maltreatment of these workers translated into a lack of protection and abysmal pay in commodified versions of these roles post-slavery, including in the exclusion of domestic workers in most New Deal reforms. Working conditions and pay for such work reflect the societal views of care jobs and workers, including the extent of scrutiny on whether they are “skilled” jobs. There is a close link between care workers and care recipients, including people who are both. Ableist narratives and policies devalue and dehumanize people needing care and are inextricably linked to the racialized systems of oppression that devalue care workers’ labor. Consequently, the fight for better working conditions and pay for care workers is inseparable from also centering and improving conditions for care recipients.

Our forthcoming study aims to provide policymakers a broad economic framework for thinking about how to pay care workers, including both home health care and child care workers, who are extremely undervalued and underpaid in the United States and across the world.

Using the research literature and microdata, we provide several considerations for setting pay standards for both home health care and child care workers: a minimum standard for all workers; an estimated strong wage standard that reduces wage penalties currently faced for performing care work and reduces penalties associated with racial and gender discrimination; an additional estimated union wage premium for care workers; and a look at other countries or professions for reasonable benchmarks (summarized in Table 1). We conclude with a discussion of how these pay penalty calculations can serve to set equitable and sustainable wage standards and combat wage suppression. 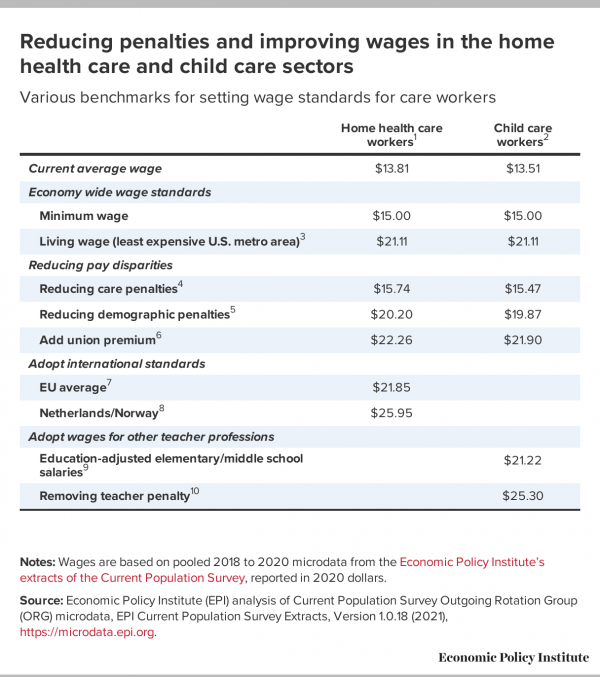 Setting an equitable wage in the care sector—which our wage estimates and discussion above hope to help guide—is a first step in transforming a truly undervalued and undercompensated industry. It is important to note that given wage suppression factors and centuries of entrenched racial and gender discrimination, no single practice is perfect. None are likely to completely eliminate the structural disparities inherent in the care sector. However, reform and significantly higher wages are possible, necessary, and long overdue. Care workers improve countless lives, very often in poor working conditions and for low pay. At the same time, they face a myriad of penalties and have limited other options due to historical and current labor market discrimination. The economic exclusions endured for being a member of subordinated groups across gender, race, and migration status reinforce each other and are reflected in the observed outcomes and demographic breakdowns we see in these industries. These multiple penalties must be considered when determining just how much care workers should be paid. Active policies, such as strong legislative or regulatory wage standards, must be implemented to begin to eliminate these penalties.

Our economic system, left to its own, has failed to recognize the worth of care work and maintain a well-functioning market. Securing living wages, dignity of work, and safe working conditions for care workers is necessary for our collective survival. Better pay and work standards unambiguously improve the lives of workers themselves. Further, they make the care provision better, secure a stable workforce, reduce turnover, and are good for the macroeconomy. These are all necessary amid demographic shifts that will increase the need for care work in coming years. Care work is valuable, demanding, and requires specialized skills, where workers are routinely making highly consequential decisions about and with care recipients. Addressing the wage suppression of care workers is unmistakably an intersectional gender, racial justice, disability, and immigrant rights issue. By making deliberate policy choices rectifying historical and current harms and grounding them in the experiences of the most marginalized of these workers, we are ensuring a shared prosperity for all.