One of the most widely discussed data points from last month’s jobs report was the rapid acceleration in wage growth for the leisure and hospitality (L&H) sector, particularly among production and nonsupervisory workers. This sector-specific wage acceleration (not seen in other sectors), combined with disappointing economywide job growth for the month, launched a huge debate about potential labor shortages. We wrote previously about why concerns over labor shortages were largely misplaced. Among other things, the rapid wage growth in L&H was accompanied by very fast sectoral job growth, so there was no evidence that any labor shortage was impinging on overall growth.

Further, this acceleration of wages in L&H might provide less evidence of even a sector-specific labor shortage than previously thought. When economists or other analysts express concerns about labor shortages, they generally mean a shortfall of potential employees that forces employers to gouge deeper into their profit margins to raise wages to attract workers. At some point this gouging will become unsustainable and so hiring will lag.

Below, we expand a bit on each of these points.

Employment shares and wages within the leisure and hospitality sector

Table 1 below highlights how much the overall wage trends of the L&H sector are driven by wage growth within one subsector: full-service restaurants and bars.

The table examines two time periods: February 2020 to April 2020 and December 2020 to March 2021. These two time periods span the extreme shutdown of economic activity spurred by the onset of COVID-19, and the most recent few months when alleged labor shortages have broken out in this sector.

This table—and the fact that wages in these sectors include tip income—help inform the next two points.

Surprisingly to many, most measures of wage growth actually showed a sharp acceleration between February and April 2020, a time that saw more than 22 million jobs lost. The reason for this odd finding is well-understood: lower-wage workers suffered far greater losses than average, so removing them from the calculation of average wages led to an arithmetic boost in wages.

This economywide pattern of wage growth driven by composition effects also held for the overall L&H sector, with wages spiking sharply during the COVID-19 crash. But production and nonsupervisory workers in this sector saw unusually sharp wage declines over this period. Were employers in this sector furiously cutting base pay in those months? Almost surely not.

The wage declines were driven entirely by declines in the tip-dependent sector of eating and drinking places, and, more specifically, in full-service restaurants and bars. To see this, look at the second two columns in Table 1 for the period between February 2020 and April 2020: only eating and drinking places saw wage declines, all other L&H sectors saw wage gains. Further, these declines were 10 times larger in tip-dependent full-service restaurants and bars than in other eating establishments. When the reallocation effect, described above, is included, these two subsectors account for all the fall in L&H wages during the COVID-19 shock of March-April 2020. Given that tips are essentially a constant share of total restaurant sales, and given that restaurant sales utterly plummeted in March and April 2020, it seems clear that this could be a major factor explaining the wage collapse among these workers during that time.

Since December 2020, wages for production and nonsupervisory workers in full-service restaurants and bars have been rising rapidly–far more rapidly than any other part of the L&H sector. In fact, wage growth in these two sectors can account for more than 70{e5fab30bc1af2ab9862fe5c16f5be581fd243b6ad78468b48e940aadfb2b849d} of the rise in wages in the overall L&H sector. To see this, examine the last column on the right in the table, which shows that wage growth within the full-service restaurant and bar subsector contributed $0.37 to the $0.51 wage increase in the overall L&H sector. When the reallocation effect is included, these two subsectors account for all the recent acceleration of wage growth in L&H.

Restaurant sales and tips track the rise and fall of wages

In Figure 1 below, we construct a very rough estimate of tips per hour worked by production and nonsupervisory workers in all eating and drinking establishments. We take monthly retail sales for all eating and drinking establishments from the Census Bureau (this data do not allow us to break out full-service restaurants separately). We then multiply this by 7{e5fab30bc1af2ab9862fe5c16f5be581fd243b6ad78468b48e940aadfb2b849d} to get an estimate of tip income. (Previous research has found that the average tip in full-service restaurants is a bit over 14{e5fab30bc1af2ab9862fe5c16f5be581fd243b6ad78468b48e940aadfb2b849d}, but we cut this in half because in nonextraordinary times about half of the sales in the eating and drinking establishments data come from limited-service restaurants.) We then divide this total tip income by the hours worked by production and nonsupervisory workers in eating and drinking sectors, giving us a measure of tips per hour. 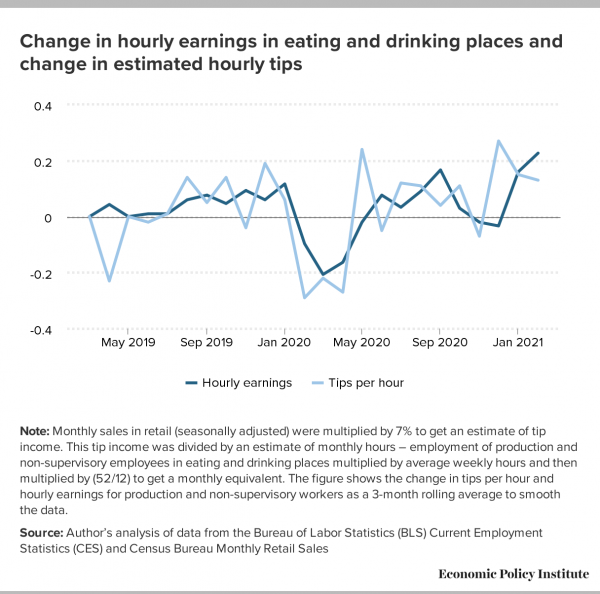 When data for these subsectors’ wages are released for April, it will likely show another big step up in wage growth. But this is likely because restaurant sales in April increased sharply as well, allowing tips to provide another big boost to wage growth in this sector.

The sharp wage acceleration in the L&H sector attracted much attention during last month’s jobs report discussions. It was taken as a sign of an unambiguous labor shortage, and some feared a spillover into other sectors and an imminent “overheating” of the economy.

These claims were always overblown. But one more reason why this wage acceleration is unlikely to spill over into other sectors is that it has almost surely not been driven by employers gouging deep into their own profit margins to increase base pay, but instead by a restoration of tip income as restaurants get closer to their pre-COVID capacities.

For the past year, restaurant workers have noted in surveys that a large decline in tip income is a huge job-related stress associated with the COVID-19 shock (among many others). Luckily, this tip collapse seems to be relenting as the economy opens back up, but restaurant sales and tips returning to near-normal levels is not a reason to imagine economywide labor shortages are imminent. Policymakers should not begin reeling back the relief and recovery efforts they began earlier this year—the economy is still far from fully healed, let alone overheating.