In March 1965, Dr. Martin Luther King Jr., John Lewis, and several other civil rights activists and leaders led thousands of nonviolent demonstrators on a march from Selma to Montgomery, Alabama. This five-day, 54-mile march was conducted in an effort to register Black voters in the South safely and campaign for broader voting rights regardless of race and ethnicity. The Civil Rights Act of 1964—passed only a few months before—prohibited unequal application of voter registration requirements, racial segregation in schools and public accommodations, and employment discrimination. However, the law was inadequately enforced and had done very little to ensure and protect Black people’s right to vote.

The culmination of literacy tests, economic retaliation, and racial terrorism prevented many Black people from registering to vote and fully participating in our democracy, particularly in Southern states. The inexplicable link between brutality and voter suppression is deeply entrenched in American history and has shaped many of the historical events within the civil rights era.

The racial violence and tension that many Black people had experienced daily reached a boiling point during the first attempt at marching from Selma to Montgomery where demonstrators, led by John Lewis and others, were beaten and tear-gassed by state troopers and Ku Klux Klan members, leaving them unable to progress forward.

Infamously known as “Bloody Sunday,” the events of this gruesome demonstration shocked the nation. The fierce outrage led to a federal court order permitting the voting right marchers to finish their journey while under the protection of the National Guard. The events in Selma and the growing public support for the protestors later motivated Congress to pass the Voting Rights Act of 1965 prohibiting racial discrimination in voting and barring voter registration loopholes like poll taxes and literacy tests. Following the passage of the Voting Rights Act, voter registration increased significantly as seen in Figure A.

The legacy of the March on Selma is both inspiring and somber for several reasons. Without the sacrifice of so many brave civil protestors, activists, and demonstrators, we wouldn’t have many of the voting protections we have today. However, despite their valiant efforts, our country is still fighting to protect our basic right to vote over 50 years later. Currently, faith leaders and activists around the country are protesting through hunger strike to urge Congress to pass meaningful voting rights legislation to combat the threats against our democracy in the form of rampant voter suppression.

Across the country, state legislatures are cutting back on early voting, gerrymandering, narrowing voter identification requirements, and passing felony disenfranchisement laws. In the wake of the 2020 election, at least 19 states had passed 34 laws restricting access to voting, and more than 440 bills with provisions that restrict voting access have been introduced in 49 states in the 2021 legislative sessions. Figure B illustrates the states that have either enacted expansive voter protection bills, voter restrictive bills, or a mixture of both. 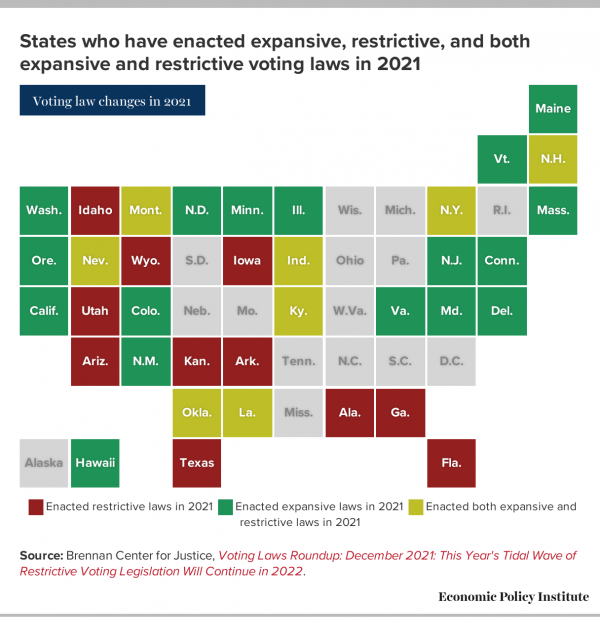 Both of these policies contribute to lower wages and benefits while weakening workplace protections and the economic security of these workers and their families. These policies also disproportionately hurt workers of color and exacerbate the economic harm and disparities communities of color face. Without broader voting access and increased protections against voter suppression tactics, these policies will continue to maintain the long-standing history of racial segregation and economic oppression in this country.

Congress has the unique opportunity to address many of these obstacles by passing the Freedom to Vote Act, which would significantly bolster voter participation and access, promote racial justice and equity, and counter the ongoing assault on voting rights within state policy. Specifically, the Freedom to Vote Act would:

The right to vote is a critical economic provision that enables people to have a voice in local, state, and federal decision making as well as how resources are allocated for their families and communities. Without protecting this right, the needs of voters and their families will be unmet and their economic well-being could be at risk.

Limited voting options—as seen during the ongoing COVID-19 pandemic and the 2020 elections—present even more challenges for voters who are exercising their right, and other forms of voter suppression make voting inaccessible to many of the least privileged members of society. For groups who have been historically disadvantaged, these implications are far more acute and sustain present inequities. Congress must pass this bill to invest in our democracy and safeguard our rights.

The Freedom to Vote Act embodies many of the sacrifices, hopes, and dreams that demonstrators fought for in the March on Selma. Fifty years later, our country is on the path of reconstructing those dreams into restorative policy. This comprehensive bill reform exemplifies the true goals of our democracy and strives to strengthen the voices of those who have been systematically excluded.