Because the COVID-19 pandemic and ensuing recession led to skyrocketing unemployment rates in early 2020, 23 states were forced to take out federal loans to continue paying out unemployment insurance (UI) benefits. While interest was initially waived on these loans, these debts started to collect interest after Labor Day of 2021. In recent months, many states have chosen to use federal fiscal relief funds given to state and local governments by the Coronavirus Aid, Relief, and Economic Security (CARES) Act of 2020 and the 2021 American Rescue Plan (ARP) to pay off accumulated UI trust fund debt.

This blog will detail why this is a poor use of federal recovery funds. Our main arguments are:

The expanded UI programs created in the CARES Act were crucial in providing relief to millions of people and creating a foundation for economic recovery. With unemployment rates in April 2020 reaching levels unseen since the Great Depression, the new and expanded UI programs propped up the inadequate preexisting state UI system and kept millions afloat by boosting household income. After being continued (albeit at less-generous levels) by the American Rescue Plan (ARP) in March 2021, the last of the federal UI programs expired at the beginning of September this year. This expiration cut off 7.5 million benefit recipients instantly and is projected to lower annual incomes by $144 billion.

Besides the temporary continuation of the pandemic UI programs, the ARP also allocated $350 billion in federal fiscal relief to state and local governments. The stated aims of this tranche of relief was to help stimulate demand to boost economic recovery and to make up for past public investment deficits (i.e., to help “build back better”). While many states are using ARP funds to support employment and expanded investments in areas like access to justice, arts and tourism, broadband, education, housing, workforce development, and more, other states have used ARP funds for less-useful purposes.

Given the huge value provided to workers by a well-functioning UI system, earmarking ARP fiscal relief to UI trust funds may seem like a useful way to spend these funds. However, paying down past debts does not support current employment or investment—and this support will be crucial for state and local governments in the coming years.

Further, history clearly shows that using federal relief funds to pay down accumulated UI trust fund debts is primarily a way to avoid raising employer-side taxes that finance state UI systems. Eventually, if we want a robust UI system that protects workers, we need to collect more money from employers through UI taxes—and doing it now is a much better way to pay down trust fund debts accumulated in the past 18 months than using federal relief funds.

So far, 16 states (shown below) have collectively allocated $15.7 billion of ARP dollars toward their state UI trust funds. This comes after 23 states already used CARES Act funding to supplement their UI trust funds. 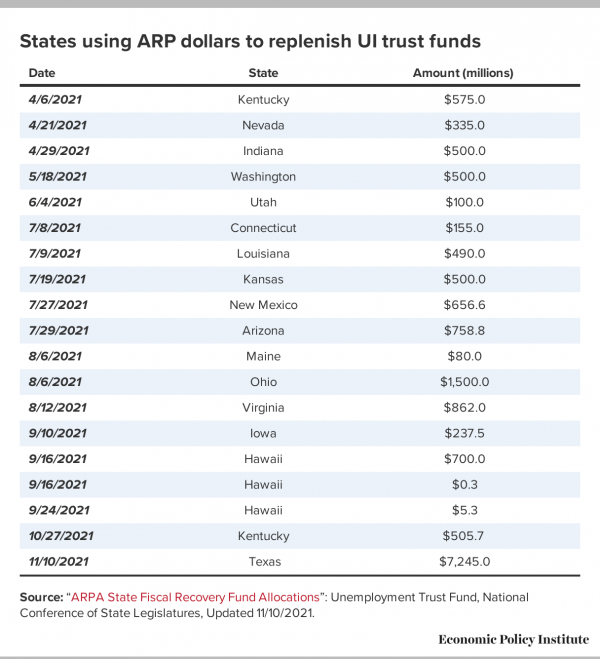 If a healthy UI system is a progressive good, why isn’t paying down accumulated UI trust fund debt a progressive use of American Rescue Plan funds?

It has been repeatedly argued that our current compounding crises necessitate an equitable recovery, where funds should be centered on the needs of working people and people marginalized and subordinated in our society. Using ARP funds to temporarily boost UI generosity in the face of continued pandemic conditions, or to modernize state UI systems to allow benefits to be paid in a timely and fair way, or to make a down payment on structural UI reform to make the system more protective of jobless workers, would all be admirable uses of ARP fiscal relief. However, using these funds to pay down accumulated debt provides no help to today’s workers relying on UI, and is instead just an insurance policy against employers having to pay higher taxes to finance UI in coming years. Given that these taxes are trivially low in dozens of states, protecting employers from any rise is hence not a progressive priority.

Normally, UI is funded by a mixture of state and federal taxes levied on most employers, where employers pay a federal UI tax authorized by the Federal Unemployment Tax Act (FUTA) and a state unemployment tax as determined by individual state law. The FUTA tax rate is 6.0% on the first $7,000 of wages each employee is paid. However, employers are offered a tax reduction of up to 5.4 percentage points off this FUTA rate for paying their taxes on time (employers in states that have outstanding federal loans often do not qualify for this FUTA reduction). This means that some employers pay a meager $42 per year per employee in FUTA taxes.

Given how low UI taxes are on employers, using ARP funds to pay down UI trust fund balances simply to avoid increasing today’s often-trivial employer contributions is not a high-value or equitable use of ARP fiscal relief. The allegedly onerous cost of UI taxes for employers, particularly on small businesses, is the primary reason given for diverting ARP funds to state UI funds. This claim clearly exaggerates the burden on employers and is particularly harmful for progressive reforms because adequate UI taxes are vital for creating a healthy UI system.

Lessons from the Great Recession

We only have to look back to the Great Recession to see workers being hurt from the reluctance to increase UI taxes, when states had to take on federal loans to pay unemployment insurance. Between 2007 and 2012, 36 states borrowed federal dollars to pay unemployment benefits, more than during any previous recession. The downturn, with its historically high unemployment levels for extended periods of time, pulled the rug from underneath highly ill-prepared state UI systems. In 2007, only 19 state UI systems had achieved financial solvency, compared to 37 before the 2000 recession.

Having incurred debt to cover benefits during the worst of the recession, many states took drastic steps to avoid increasing UI taxes to pay back federal loans, at the expense of workers and the long-run health of their UI systems. To refill their UI coffers more quickly, nine states reduced the length of their unemployment benefits package below 26 weeks while 14 states froze or reduced their maximum weekly unemployment benefits. The decision to cut UI during an economic recovery was unprecedented.

Tellingly, states that cut UI duration were not particularly better off in their trust fund solvency during the recession but did have histories of cutting safety net programs. Cutting UI duration caused unemployed workers to lose an average of $252 a week, while also undermining the macroeconomic benefits associated with strong UI benefits. States also lowered enrollment by reducing eligibility and adding additional barriers for UI applicants.

In 2017—eight years into the recovery—UI taxes were at their fourth lowest levels in the history of the UI system, and despite cruel and unprecedented cuts to benefits, aggregate trust fund balances were only half of what they had been in June 2000. State lawmakers’ unwillingness to place higher UI taxes on employers not only contributed to the ill-prepared state of UI before the Great Recession but also failed to adequately strengthen UI systems before the pandemic recession, all while making decisions that harmed workers and dragged down the recovery.

Using federal recovery funds to top up UI trust funds does not actually fix any of the well-documented, long-run problems with UI. The expanded UI programs created in the CARES Act propped up the inadequate preexisting state UI system with federal funds and kept millions afloat by boosting household income. The three federal pandemic UI programs were created to meet three very specific shortcomings in the existing UI architecture: eligibility (too few people were eligible, especially gig workers and independent contractors), duration (UI benefits didn’t last long enough), and generosity (the small benefit amount was barely enough to cover costs). If states really want to equitably use ARP funds on UI, they should spend the funds addressing these problems in their UI programs, as well as upgrading outdated UI technology and boosting administrative staffing capacity. Using ARP funds to pay down UI debts simply kicks the can down the road for redesigning these systems and ensuring they’re adequately financed.

Using ARP funds to pay down UI trust fund debt accrued in the past also takes away money that could be used in the present to support public employment and strengthen public goods and services. State and local government employment is still down almost a million jobs from before the pandemic, with the majority of those missing jobs in K-12 education. These funds could also be used to eliminate barriers to accessing both UI and other social services, and increase direct cash transfers. In the end, not only does direct spending on public services and aid to households offer financial relief and recovery, they have also been shown to have a stronger macroeconomic stimulus effect than aid to businesses like tax cuts. Using ARP funds on public services and people, rather than giving an employer tax cut through paying off UI funds, is good economics and the right thing to do.

In its role both as social insurance when people lose their jobs and as a macroeconomic stabilizer to boost aggregate demand, UI has never been more successful than during the 2020-2021 downturn. Compared to the 2007-2009 recession, UI as a share of personal income was four times as high in 2020-2021. Given its success and widespread usage, especially by workers previously excluded from the UI system, allowing these programs to expire with no replacement was a harmful decision.

Up to 390,000 federal contractors will benefit from a $15 minimum wage starting in January