Data from large firms filing information on CEO compensation through the end of April show corporations and a strong stock market shielded CEOs from the financial impact of the pandemic.

An examination of the early filings of 281 large firms shows:

We report two measures of CEO compensation. The first is ‘realized direct compensation,’ a measure incorporating salary, bonus, long-term incentive payouts, stock options exercised, and vested stock awards. We also report on a ‘granted compensation’ measure of CEO compensation which has the same components, except the stock-related items (stock options and stock awards) are valued when granted rather than when exercised or vested. Further technical details about our data and definitions are available in Mishel and Kandra (2020). 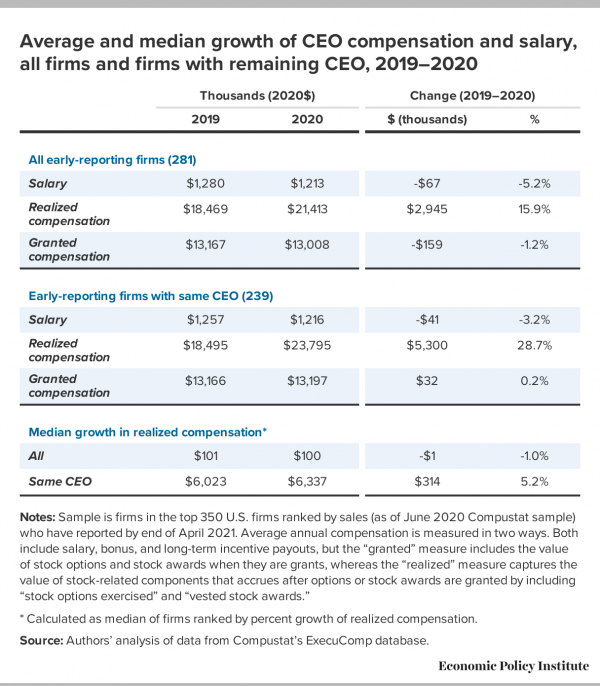 These large increases in CEO compensation occurred even though CEO salaries were stable (many CEOs offered to not take salary increases, something entirely symbolic given the growth of the other components of compensation). An assessment of the individual components of compensation show that CEO compensation increases were driven entirely by the huge increase in the value of exercised stock options and vested stock awards in 2020, presumably to take advantage of the high stock prices. Realized stock options for CEOs that stayed in place rose by 81{e5fab30bc1af2ab9862fe5c16f5be581fd243b6ad78468b48e940aadfb2b849d}, up $3.6 million and accounted for 68{e5fab30bc1af2ab9862fe5c16f5be581fd243b6ad78468b48e940aadfb2b849d} of the total rise in realized compensation. Vested stock awards grew by 1.9 million and accounted for 36{e5fab30bc1af2ab9862fe5c16f5be581fd243b6ad78468b48e940aadfb2b849d} of the rise in realized compensation. Bonuses, salaries, and long-term incentives actually fell. 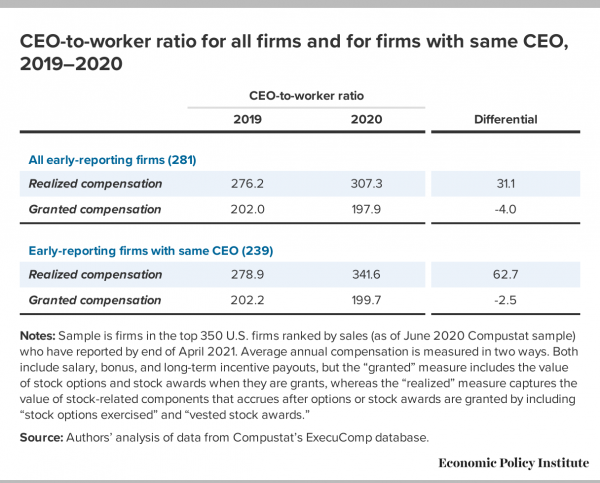 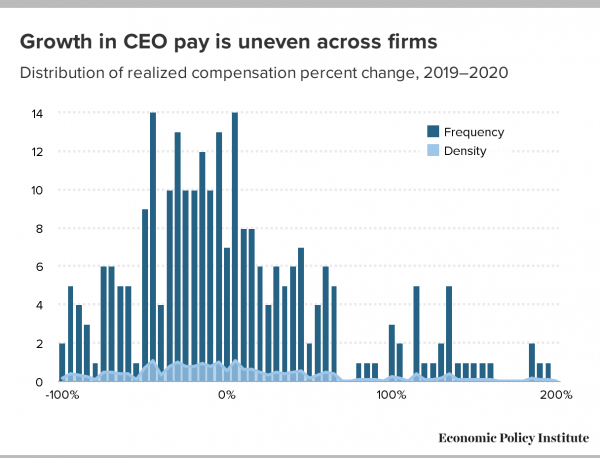 This analysis of CEO compensation indicates that the stock market growth in 2020 has contributed to a major leap forward in CEO compensation, compounding the income and wealth inequalities that have emerged in the pandemic. There are also examples of firms making “discretionary adjustments” to their compensation schemes to shield CEOs from “the pandemic’s adverse impact on the company’s financial results.” Such adjustments, of course, were not made for rank-and-file workers.

The Institute for Policy Institute report shows that 51 of the 100 S&P firms with the lowest median pay “bent their own rules to pump up executive paychecks” and “provided a 29{e5fab30bc1af2ab9862fe5c16f5be581fd243b6ad78468b48e940aadfb2b849d} boost to executive pay, far more than the other firms.” The impact of these adjustments on the growth of CEO compensation will be fruitful to analyze as more data emerge. Our regular report on CEO compensation of the 350 largest firms will be available in July.