In 2019, Black American households finally surpassed the median income peak they achieved prior to the Great Recession of 2008-2009. In 2020, however, the pandemic recession cut that long recovery short.

The impact of the pandemic is most clearly reflected in the historic single-year decline in full-time, year-round employment.

The number of full-time, year-round workers fell by about 13.7 million between 2019 and 2020, and the losses were largely borne by lower earners. Due to systemic and structural inequalities in the labor market, those lower earners are more likely to be women and men of color. As shown in Figure B, the number of full-time, year-round earners declined 17.4% among Hispanic women and 16.3% among Hispanic men between 2019 and 2020. The corresponding changes for Black women and men were 13.1% and 13.0%, respectively. White, non-Hispanic women and men saw declines of 9.9% and 9.2%, respectively.

The pandemic’s biggest effect on equity during 2020 stems from disproportionate shares of women—and Black and Hispanic women in particular—losing full-time, year-round work. This disproportionate burden was largely felt because these workers are more likely to work in face-to-face service jobs (retail and leisure/hospitality) that were devastated by the necessary social distancing response to the pandemic. 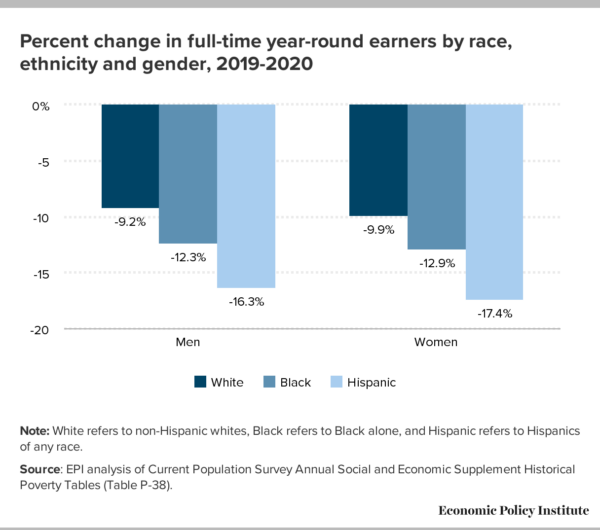 Perhaps surprisingly, median earnings actually increased—both for men and women—among workers who remained employed full time year round in 2020. Black men had the largest increase in median earnings (8.9%), followed by Hispanic men (7.2%), and white, non-Hispanic men (2.4%). Among women who were employed full time year round in 2020, earnings increased 5.9% among Hispanic women, 3.4% among white, non-Hispanic women, and 2.9% among Black women. This rise in median earnings, however, is a quirk of arithmetic, not an actual broad-based increase in workers’ living standards. The rise stems from the mechanical effect of the pandemic’s economic shock disproportionately removing lower-paid workers from this sample of full-time, year-round workers. This effect is because the retail and leisure/hospitality jobs wrecked by the pandemic tended to be lower paid.

The 2020 official poverty rates also reflect the sharp decline in employment and earnings between 2019 and 2020. As seen in Figure C, these official poverty rates either rose or remained unchanged for all groups. Poverty rates were highest among Blacks (19.5%, statistically unchanged from 2019), followed by Hispanics (17%, up 1.3 percentage points), whites (8.2%, up 0.9 percentage points), and Asians (8.1%, up 0.8 percentage points). Black and Hispanic children continued to face the highest poverty rates—more than one-quarter (26.4%) of Black children and more than one-fifth (23.1%) of Hispanic children under age 18 lived below the poverty level in 2020. Black children were more than two and a half times as likely to be in poverty as white children (9.9%). Moreover, 8.4% of Asian children lived in poverty in 2020. 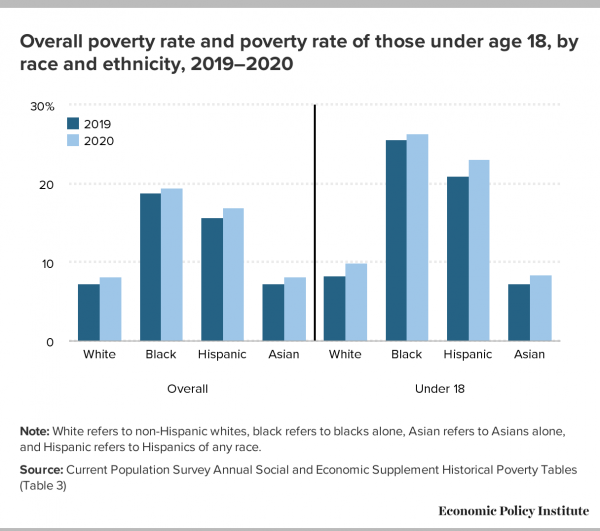 The Supplemental Poverty Measure (SPM), an alternative to the long-running official poverty measure, provides a more accurate measure of a household’s economic deprivation. While the official poverty rate captures only before-tax cash income, the SPM accounts for various non-cash benefits and tax credits. The SPM also allows for geographic variability in what constitutes poverty based on differences in the cost of living.

The substantial reduction in poverty captured by the SPM, even compared with SPM estimates from 2019, reveals that we have the capacity to lower significantly lower poverty rates through progressive policy—we simply need the will to do so.