The COVID-19 pandemic has highlighted and exacerbated underlying disparities in the health and economic wellbeing of people across the country. Segregated cities and neighborhoods have devastated many—disproportionately Black and Hispanic communities—under the weight of the pandemic and the ensuing recession, while others have been less impacted. Some families have seen multiple family members and friends become seriously ill or lose their jobs, while others have come away relatively unscathed (and in some cases, prospered). Millions of workers have risked their health and the health of their families by going to work in-person, while others have been able to work from home and don’t regularly encounter those facing the pandemic’s wrath.

The bottom line: disparities persist between who can safely stay home and get a paycheck and who cannot.

There are three main groups of workers in the COVID-19 economy: those who have lost their jobs and face economic insecurity, those who are classified as “essential” workers or are otherwise working on-site and face health insecurity as a result, and those who are able to continue working from the safety of their homes. In this blog post, we examine workers who are able to telework across demographics and job characteristics and find not only that only one in five workers are able to telework because of the pandemic, but that there are overwhelming disparities among Black and Hispanic workers and those without a college degree or higher.

In spring 2020, 22.4 million jobs were lost in two months. As of April 2021, 14.1 million jobs had been added back, but that means employment is still down more than 8 million jobs from its pre-pandemic level in February 2020. Further, if we include the likelihood that thousands of jobs would have been added each month over the last year without the pandemic recession, the jobs shortfall is more likely in the range of 9.0 to 11.0 million.

Disproportionately low-wage workers lost their jobs; even within the low-paid leisure and hospitality industry, it was the low-wage and low-hours workers who were more likely to suffer job losses in the recession. Job losses disproportionately impacted Black and Hispanic workers early on and those workers continue to face significantly higher unemployment rates than other workers.

Women have also faced disproportionate job losses in the pandemic, due in part to both occupational segregation (i.e., women are disproportionately more likely to hold lower-wage service-sector jobs) and caretaking responsibilities (i.e., closed schools, limited day care options, and caregiving responsibilities for other family members in general). Young workers and older workers were particularly devastated by the pandemic recession as well.

The second major group of workers in the economy are those who had to go to work in-person, those classified as essential workers and others working on-site who have faced health insecurity as a result. And the third major group of workers are those who could keep receiving a paycheck but could do it from the safety of their own home. Because these are the flip side of the same phenomenon, we discuss them together.

Before the pandemic hit, the American Time Use Survey (ATUS), distributed by the Bureau of Labor Statistics (BLS 2019), provided a baseline on workers who could and did work at home by various demographic and job characteristics. Using these data, we knew that white and Asian workers were more likely to be able to telework than Black and Hispanic workers. The youngest and oldest of workers had less access to telework. Higher-wage workers were six times as likely to be able to work from home as lower-wage workers. And, not surprisingly, workers in certain industries were more likely to be able to work from home than others. Leisure and hospitality—the sector with the largest job losses—had the smallest share of workers with the ability to telework, about one-sixth as likely as workers in financial activities, professional and business services, and information.

During the pandemic, the Monthly Labor Review published research examining how often workers actually teleworked (among those who were able) and which jobs were most able to be performed from home once the pandemic shuttered businesses. They found that employment fell by 21{e5fab30bc1af2ab9862fe5c16f5be581fd243b6ad78468b48e940aadfb2b849d} in occupations where telework was not feasible and only 8{e5fab30bc1af2ab9862fe5c16f5be581fd243b6ad78468b48e940aadfb2b849d} in occupations where telework was feasible. Other research from the Federal Reserve Bank of Dallas found that those workers who commuted pre-pandemic had less ability to transition to working from home and were more susceptible to job loss, thus making it harder to maintain economic and health security during this time.

In our analysis, we examine the supplemental data questions added to the monthly Current Population Survey, the household survey that reports official unemployment rates among other important indicators. The key statistic provided in this supplement analysis answers this question: “At any time in the last four weeks, did you telework or work at home for pay because of the coronavirus pandemic?”

At the beginning of the pandemic (and the height of teleworking), a little more than one-third of the entire workforce was teleworking because of the pandemic (see Figure A). This is more than four times what the economy had ever experienced pre-COVID, according to the ATUS estimates (8.1{e5fab30bc1af2ab9862fe5c16f5be581fd243b6ad78468b48e940aadfb2b849d} of the workforce 15 years and older teleworked for pay at least one full day per week).i

Figure B shows the share of workers who teleworked as a result of COVID by select demographics to expose the disparities that exist not only across education levels (as previously discussed), but also across age groups, gender, race/ethnicity, and citizenship. According to Figure B, young workers are least able to work from home, which is not surprising given their tendency to work in face-to-face occupations, where job losses were also greater. In the pandemic, women were more likely to telework than men. 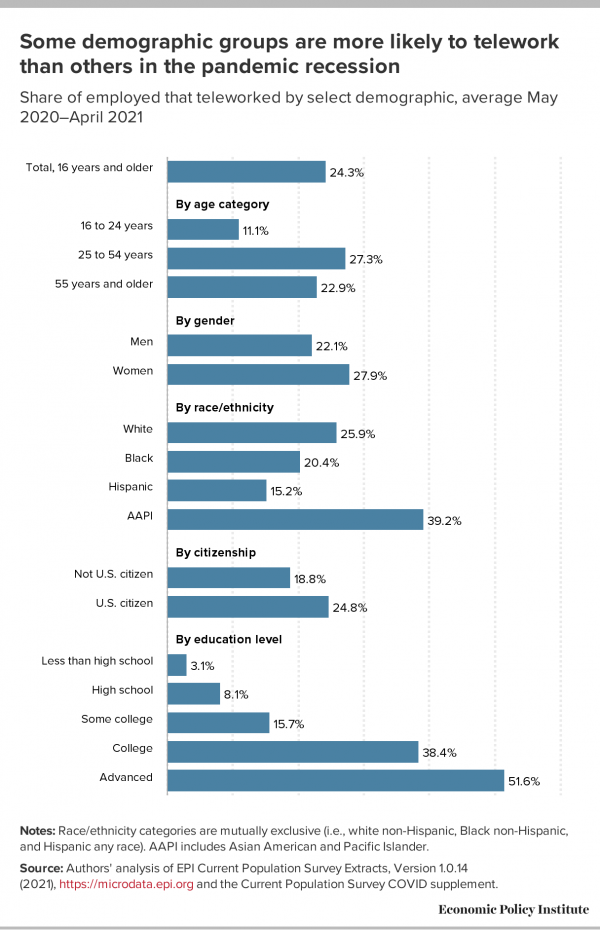 The disparity in those who telework among racial and ethnic groups persists across education level, as shown in Figure C. Black and Hispanic workers are least likely to work from home regardless of educational attainment, compared with their white and AAPI counterparts. Figure C indicates that attaining a college degree does not insulate Black and Hispanic workers from either losing their jobs during the pandemic-driven recession or from obtaining jobs that don’t have the flexibility to transition to remote work. Alternatively, having an advanced degree appears to help close those gaps, albeit for the small share of the population with those levels of education (just 15{e5fab30bc1af2ab9862fe5c16f5be581fd243b6ad78468b48e940aadfb2b849d} of the current workforce has an advanced degree). With that notable exception, Black and Hispanic workers are economically suffering from the pandemic more than their white and AAPI counterparts across the board. 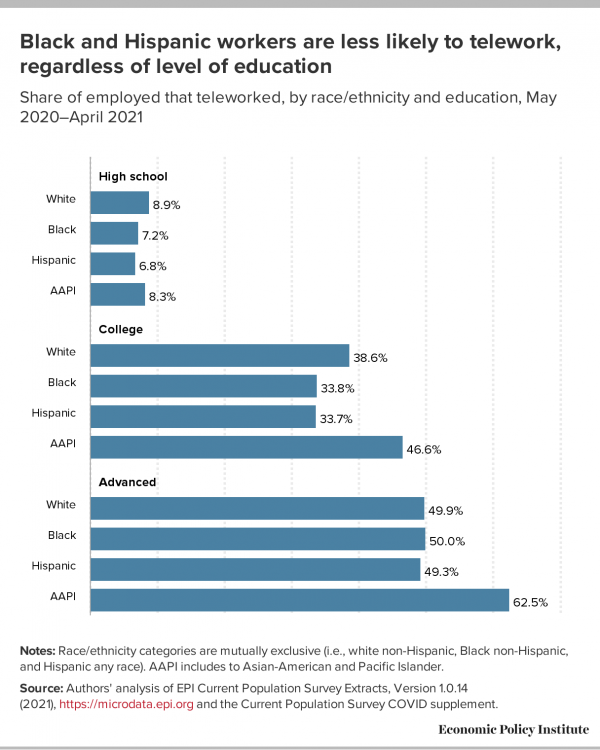 As the labor market continues to recover, we will see in-person employment pick up and the share of the workforce teleworking continue to fall. Unfortunately, this does little to ease the pain that millions of workers who did not and do not have the ability to telework from home have experienced during the pandemic. These drastically different realities—those who can or cannot work from home—are reinforced by those we encounter, work with, go to school with, socialize with, and highlights the difficulty of seeing other people’s experiences when they may be so different from our own. Although it remains to be seen what the long-lasting impact of teleworking will be on the labor market and the economy as a whole, it’s important to keep in mind who has been most shielded from the economic and health devastation of the pandemic recession—and underscores why policymakers must build an economy that works for everyone now, not just for those we know and can see, and before the next disaster strikes. 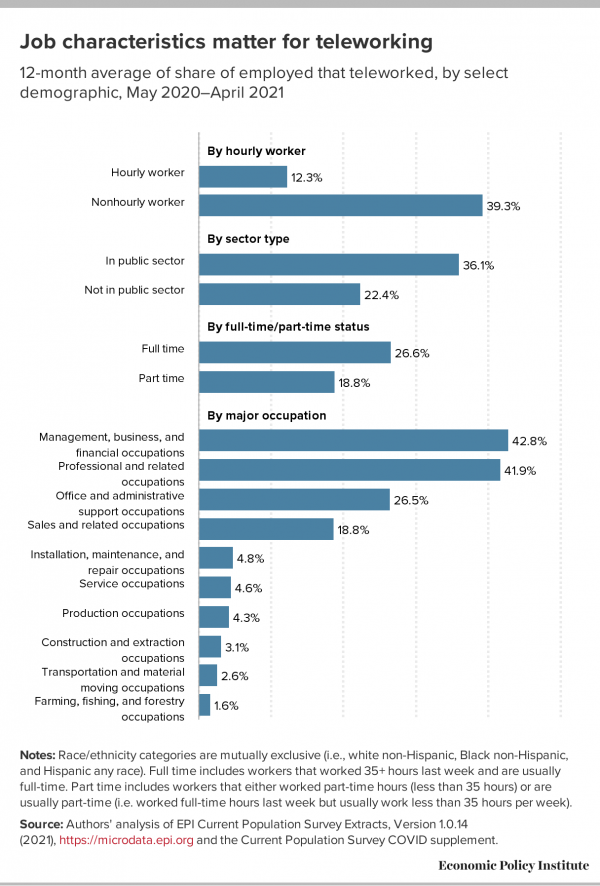 i. The 2017/2018 ATUS data is not exactly comparable to the CPS pandemic data on telework, but we made some reasonable assumptions to make them more useable for comparison. We include only those who teleworked one day a week or more in the ATUS, removing those who only teleworked a few minutes or occasionally. However, the fact remains that the CPS is only measuring those who teleworked because of the pandemic so it may be seen as a lower bound on the overall number teleworking. For instance, some teleworkers may have always been teleworkers and therefore would not be teleworking because of the pandemic, so they’d be captured as teleworking in the ATUS but not the CPS. Duration of teleworking was not available for workers with less than a high school degree, so we apply the share of regular teleworkers (at least one day a week) among all teleworkers with only a high school degree to those with less than a high school degree.