For over a decade, EPI has documented the significant pay penalty that teachers in our country’s K-12 schools suffer as a result of woeful underinvestment in public education. But it is not just teachers who have been underappreciated: Many other school staff who are essential for providing high-quality, safe, and nurturing learning environments face considerable financial challenges as a result of their decision to serve in public schools. Paraprofessionals, classroom assistants, administrative assistants, custodians, food service workers, bus drivers, and other nonlicensed staff in schools typically receive low pay and inadequate hours during the school year, and no employment from school districts over the summer months—meaning a potential loss of 10 or 11 weeks of paid employment.

In 2020, Illinois took an important step toward fixing this last issue, by making nonlicensed school staff eligible for unemployment insurance during the summer months. Illinois’s experience offers guidance for other states considering similar programs, like in Minnesota where a similar measure is currently under debate. We’ll discuss the Illinois experience later on, but first it’s useful to understand a little more about who nonlicensed school staff are and the pay they receive.

Many nonlicensed school staff are paid very little. A 2018 study by the American Federation of Teachers showed there was not a single state in the country where the average wages of a classroom teaching assistant covered a basic family budget for a one-parent, one-child household. As shown in Figure A, workers in the most common nonlicensed education occupations1 are paid less than the typical U.S. worker, whose median wage is $19.38 nationally. Janitors and cleaners, child care workers, and food service workers who work in K-12 education are all typically paid less than $15 an hour. In addition to frequently low hourly rates of pay, many nonlicensed staff may only be on the clock for the hours that school is in session.2 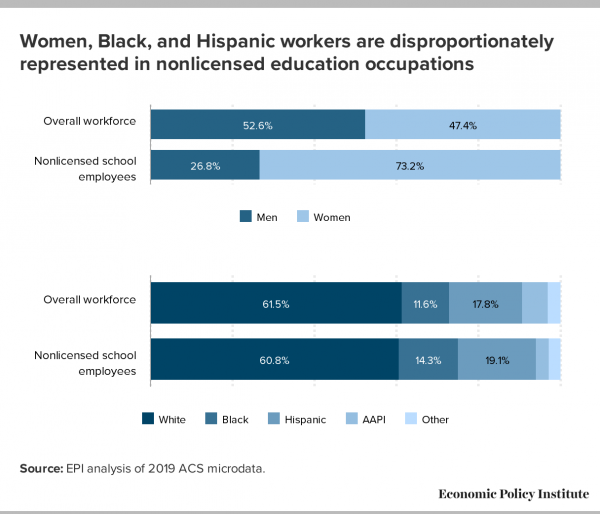 As we noted, many nonlicensed school employees are not employed over the summer months, usually missing 10 or 11 weeks of employment.3 While some are able to find summer jobs elsewhere, that is not always a feasible option. Nonlicensed school staff who perform direct student services ought to be thought of as part of the care infrastructure in the United States. These workers play vital roles in public education and yet are woefully undercompensated.

In 2020, Illinois tried something new to support the wages of these individuals with the passage of House Bill 2455, which made them eligible for unemployment insurance (UI) during the summer months.4 Educational employees are normally excluded from UI benefits in the summer if they have an assurance of continued employment when the new school year begins. Illinois’s 2020 law allowed all school employees in both public and private schools not employed in “instructional, research, or principal administrative” roles to receive unemployment benefits in the summer.

Minnesota now has a bill pending in the legislature, House File 1054, that would provide similar benefits as the Illinois bill for nonlicensed Minnesota school staff. The Illinois Department of Economic Security (IDES) released data on the utilization of HB2455 by noninstructional staff during the summer of 2020, and, assuming the uptake would be similar in Minnesota among nonlicensed staff, we can estimate how much HF1054 would lift the incomes of these staff in Minnesota.5

IDES reports that 121,153 weeks of unemployment benefits were claimed by noninstructional Illinois elementary and secondary school staff in the summer of 2020.6 Those schools employed approximately 99,757 noninstructional staff.7 If all noninstructional school workers in Illinois claimed this benefit and received the full 11 weeks, then 11.0{e5fab30bc1af2ab9862fe5c16f5be581fd243b6ad78468b48e940aadfb2b849d} of this workforce would have benefited from this program.

In Minnesota, there are approximately 62,375 nonlicensed school staff in K-12 institutions.8 If usage in Minnesota is similar to that in Illinois, we can expect 75,753 claimed weeks of unemployment benefits. In Minnesota, state unemployment benefits are 50{e5fab30bc1af2ab9862fe5c16f5be581fd243b6ad78468b48e940aadfb2b849d} of an employee’s average weekly earnings over either the whole year or the employee’s highest-earning quarter.9 The average weekly pay for nonlicensed school staff in Minnesota is $738. For a worker who is paid this average weekly amount, claiming 11 weeks of UI would amount to $4,058 over the summer. This would be meaningful support for these vital, yet underpaid, education professionals.

The cost of providing these important benefits would be quite small relative to current Minnesota school budgets. If the overall uptake in Minnesota is similar to that in Illinois, we expect that the collective benefit to nonlicensed school staff over the summer would be roughly $28 million ($738 x 0.5 x 75,753 weeks claimed), just 1.1{e5fab30bc1af2ab9862fe5c16f5be581fd243b6ad78468b48e940aadfb2b849d} of the $2,643,996,300 net fund balance of all Minnesota school districts at the end of the 2020 school year.11 While the experience of individual school districts will vary, the fact that the cost of these benefits only amounts to 1.1{e5fab30bc1af2ab9862fe5c16f5be581fd243b6ad78468b48e940aadfb2b849d} of the net fund balance suggests that HF1054 could very well be funded without additional revenue. (In Minnesota, as in most cases, school districts reimburse the state UI trust fund for the actual cost of benefits paid.)

Nonlicensed school staff who perform direct student services ought to be thought of as part of the care infrastructure in the United States. Nonlicensed school staff play vital roles in public education and yet—like so much of the U.S. care workforce—are woefully undercompensated. Providing them with access to unemployment during the summer would be a simple lifeline to many who struggle to make ends meet.

Dave Kamper, one of this post’s authors, has a strong memory of when he used to work with a local union representing school paraprofessionals. The president of that local union was paid so little that she turned off her utilities in the spring and the fall in order to save money. She would use the school bathrooms, showers, and laundry facilities, and return to a darkened home. She worked every day with special education students who needed extra time and help to succeed. She said regularly that the work was rewarding but exhausting. These important workers deserve adequate compensation for the important work they do.

2. For example, paraprofessionals in New York City Public Schools work roughly six-hour days. In Minneapolis, education support professionals have a minimum six-hour work day, and in the Anoka-Hennepin School District, one of the largest suburban school districts in Minnesota, the work day is also a six-hour minimum.

4. The law also allowed for those benefits to be applied to periods of unemployment during spring break and winter break. However, because those are short periods of time, and the recipiency rate may be very different in those periods of time, we are limiting our analysis to the summer.

5. HF1054 in Minnesota and HB2455 in Illinois both also apply to certain higher education employees, but the bills use very different definitions for who is eligible in higher education, and as such it is not possible to make a comparison between the two states. While the bills do not have identical K-12 language, the intent is the same in both cases—to allow all nonlicensed teachers and nonadministrators the right to receive UI—allowing us to use the Illinois example to estimate the cost for Minnesota.

7. EPI analysis of 2019 IPUMS American Community Survey microdata and BLS Current Employment Statistics data. We use the same definition for “noninstructional school staff” as the IDES report: individuals who are employed in occupations outside of the following categories: Community/Social Services, Education/Training/Library Services, and Life/Physical/Social Science. Our estimate of 2019 employment from ACS data is adjusted by the May 2019-May 2020 employment loss in the K-12 education and Local government employment services industries using BLS CES state-level monthly estimates.