Congress may have bought itself another month to negotiate over the Biden-Harris administration’s Build Back Better (BBB) agenda, but one thing is clear: Further reducing the scale and scope of the budget reconciliation package unequivocally means the legislation will support far fewer jobs and deliver fewer benefits to lift up working families and boost the economy as a whole.

How much will such compromise cost the U.S. economy? We crunched the numbers to find out what compromising on the BBB plan will mean for every state and congressional district in the United States. If the budget reconciliation package is cut from $3.5 trillion to $1.5 trillion—as Senator Joe Manchin (D-WV) has called for—nearly 2 million fewer jobs per year would be supported.

In a previous analysis, we showed that the BBB agenda—combining the Bipartisan Infrastructure Framework and the proposed $3.5 trillion budget reconciliation package—would support more than 4 million jobs annually. It would also make critical investments that would deliver relief to financially strained households, raise productivity, and dampen inflation pressures to enhance America’s long-term economic growth prospects. David Brooks, the center-right New York Times columnist, recently captured the significance of these initiatives when he wrote that these are “economic packages that serve moral and cultural purposes. They should be measured by their cultural impact, not merely by some wonky analysis. In real, tangible ways, they would redistribute dignity back downward.”

Senators Manchin and Kyrsten Sinema (D-AZ) are intent on scaling back Build Back Better’s purpose. While Sen. Sinema has not publicly staked a position outlining her objections, Sen. Manchin has telegraphed a top-line spending figure of $1.5 trillion as the maximum he would support.

The $2 trillion gap left by Manchin’s proposal cuts far deeper than any of the policy specifics he proposes eliminating. Even if he succeeded in eliminating all climate-related funding in the BBB agenda budget resolution, for example, Manchin’s plan would still fall nearly $1.8 trillion short. Thus, for the purpose of our analysis, it makes most sense to assume that hewing to Sen. Manchin’s demands would mean a proportional cut across all of the BBB agenda’s individual initiatives (more on the methodologies used here and here).

Besides delivering fewer tangible benefits to typical families, scaling back Build Back Better also severely compromises the package’s value as macroeconomic insurance against recovery waning in the coming years.

Absent the Build Back Better package, there is no guarantee of robust growth once the provisions of the American Rescue Plan—enacted in March of this year—begin fading out in earnest in mid-2022. The U.S. economy is not out of the woods yet. In past instances, policymakers have too often erred on the side of withdrawing fiscal support too early, resulting in protracted recoveries and prolonged spells of elevated unemployment, which ultimately undercut America’s future economic potential. The BBB package would counter a potential slump and effectively support millions of jobs, especially if a host of plausible scenarios occur, including:

Scaling back the plan now, as Sens. Manchin and Sinema would like, will support millions fewer than the original package. In total, Sen. Manchin’s proposal would support nearly 1.9 million fewer jobs per year than the Build Back Better agenda. Full results for each state and congressional district can be downloaded here and in the figures and table below.

Figure A
Figure B 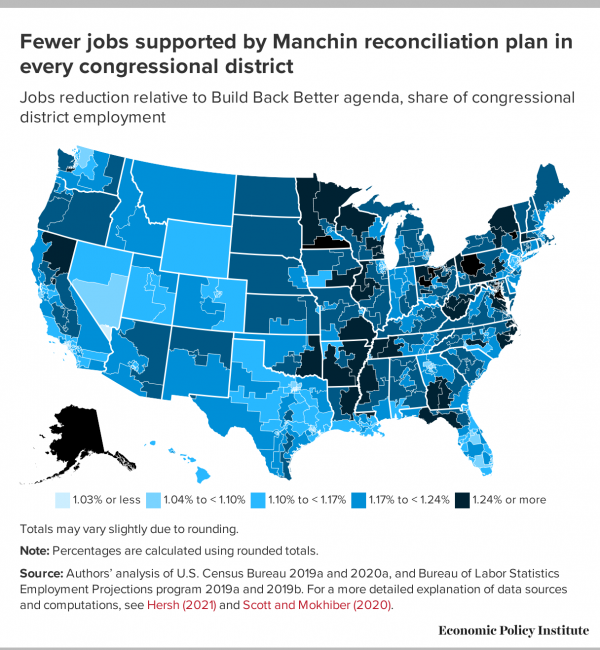